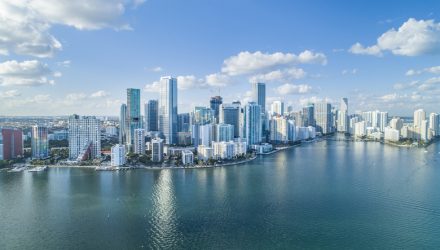 An increasing number of data points and research confirm that investors should not gloss over mid-cap stocks and consider the asset class along with related exchange traded funds, such as the SPDR Mid-Cap 400 (NYSEArca: MDY).

Mid-cap stocks and funds are often overlooked relative to large- and small-cap equivalents. Historical data confirm that should not be the case because mid caps typically outperform larger stocks while delivering less volatility than smaller stocks.

“Many mid-cap companies may possess a strategic advantage relative to firms of larger or smaller sizes, having successfully navigated the challenges specific to small companies, such as raising initial capital and managing early growth, and now offering stability with the potential of additional growth opportunities,” said S&P Dow Jones.

“Mid-cap companies have generally overcome the risks of small-cap companies, but they still have the potential to grow before exhibiting the growth deceleration often seen in large-caps,” according to S&P Dow Jones. “Mid-caps often have established infrastructure, access to capital, and developed distribution systems, but they are still nimble with motivated management teams to take advantage of opportunities quickly.”