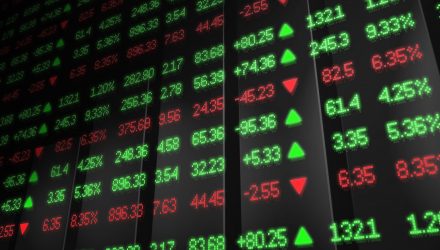 The Dow Jones Industrial Average rose over 100 points on Thursday as the markets await a much-anticipated trade deal between the United States and China. The S&P 500 was up slightly while the Nasdaq Composite notched a small loss in the early trading session.

The markets fed off optimism following a report that U.S. President Donald Trump will meet with Chinese president Xi Jinping at a trade summit–the actual date of the summit will be announced at a later time.

“The trade deal is really two deals. First, you have the numbers, the tariffs and all that; that’s the easy fix. Intellectual property on the other side, that’s not going to be fixed right away. That’s going to take a few years, in my opinion,” said Matt Lloyd, chief investment strategist at Advisors Asset Management.

Related: Fixed Income ETFs Received Over $34B in Flows During Q1

Trade negotiations between the U.S. and China have revolved around a wide range of issues, such as forced technology transfer as both are working feverishly to bring the trade war to an end. President Trump has already imposed tariffs to the tune of $250 billion of Chinese imports in 2018.

In particular, the tariffs were meant to force China’s hand in changing its business practices, particularly when it comes to issues, such as intellectual property–all as a means to get China to open up its economy to more foreign investors. China may finally be understanding these contentious subtopics of the ongoing negotiations.

“They have for the first time acknowledged that we have a point. Several points,” said White House economic advisor Larry Kudlow told reporters at an event hosted by The Christian Science Monitor.

Even if a permanent trade deal where to materialize, there’s still the topic of enforcement.

“Without enforcement, this deal fails,” Myron Brilliant, executive vice president and head of international affairs at the U.S. Chamber of Commerce, told CNBC in February. “You need to have enforcement mechanisms that will ensure that both sides have trust that this deal is sustaining and verifiable.”