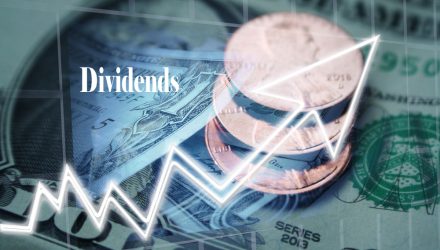 Dividend Aristocrats ETF Is Getting Some New Members

The underlying index for the popular ProShares S&P 500 Aristocrats ETF (CBOE: NOBL) is getting a couple of new additions, which is meaningful at a time when many market observers expect S&P 500 dividend growth to not sport much growth at all this year.

The new additions to the S&P 500 Dividend Aristocrats Index are coming by way of United Technologies’ (NYSE: UTX) merger with Raytheon (NYSE: RTN). The latter will become the official company, bringing that firm into NOBL’s benchmark although it hasn’t previously resided there.

NOBL’s other new residents are combine by way of UTX spinoffs.

“Two United Technologies units that are being spun out—United Carrier Global (CARR) and Otis Worldwide (OTIS)—are being added to the Aristocrats. That will bring the group’s membership to 66,” reports Lawrence Strauss for Barron’s.

NOBL’s holdings are equally weighted with none exceeding weights of 1.94% at the end of 2019, meaning that even if one of its components becomes a dividend offender and the stock subsequently sells off, the fund should be relatively immune from a big decline.

NOBL’s methodology can buffer investors from companies with an increased likelihood of negative action, an increasingly important theme in the current market climate.

“As of Wednesday morning, none of S&P Dividend Aristocrats had cut or suspended their dividends during the pandemic crisis, according to Howard Silverblatt, senior index analyst at S&P Dow Jones Indices,” according to Barron’s.

Fortunately, NOBL only allocates 2.49% of its weight to the energy sector, one of the epicenters of negative dividend action to this point in 2020.

Additionally, NOBL devotes less than 4% of its weight to real estate stocks, a group some market observers believe will be a dividend offender because of mall and retail store closures stemming from the coronavirus pandemic.

In other words, NOBL’s quality by intent design can help investors dividend cutters while sticking with a basket of companies that can grow payouts even in trying environments.