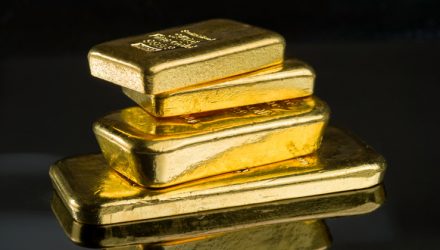 Boosting the case for gold is that the Federal Reserve recently alluded to a potential rate cut or two, perhaps as soon as this week. The capital markets initially expected rates to remain steady after the central bank spoke in more dovish tones following the fourth and final rate hike for 2018 last December.

“Gold broke above $1,400/oz for the first time in nearly six years, rallying 8.77% in Q2 2019 as the world’s major central banks turned dovish due to rising global trade tensions starting to impact economic data,” according to State Street data. “Since October 2018, gold has appreciated 18.68% as the total amount of bonds offering negative yield has more than doubled from $6 trillion to roughly $13 trillion during the same time.”

Waiting On The Fed

The market expectation of future rate cuts by the Federal saw gold surpass its 5-year high after the central bank said it “will act as appropriate to sustain” economic expansion. Gold prices took a breather by falling below the $1,400 price level, but it could be the precursor to more gains ahead.

With the central bank keeping rates steady thus far in 2019, the next move investors are hoping for is a rate cut, especially if the Fed is sensing a slowdown given the latest economic data. That should give gold ETFs a boost through the rest of the year until a cut actually happens.

The growing number of negative-yielding bonds, including corporates, around the world, boosts the allure of gold ETFs.

“The argument that investing capital in gold-backed ETFs involves significant opportunity cost loses validity as the total amount of bonds bearing negative yields has continued to grow,” according to State Street.