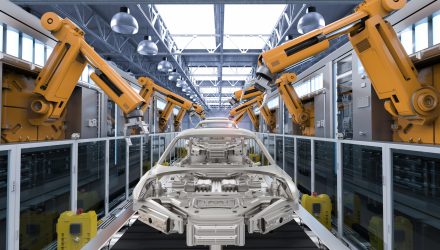 A Contraction in U.S. Manufacturing May Be Ending

A U.S.-China trade battle has been causing a contraction in manufacturing activity, but with both sides coming to terms on a trade deal, there are already tangible signs that the sector is picking up.

Per a CNBC report, a contraction in “U.S. manufacturing spurred by the trade battle with China and slowing global growth may have reached an end already, if two key business surveys hold up. Production at American facilities fell in the second half of 2019 despite an otherwise growing economy, sparking worries that a broader recession might be in the works.”

“But indicators this week from the key Philadelphia and New York Federal Reserve districts showed a sharp rebound that far exceeded Wall Street expectations,” the report added. “Early in the week, New York’s Empire State Manufacturing Survey for general business conditions posted a reading of 12.9, up 8 points from January and its best level since May. New orders surged to 22.1, the highest since September 2017, and shipments rose to 18.9, the best since November 2018.”

On Thursday, the Philadelphia survey moved 20 points higher to 36.7, making it the highest reading since February 2017. As for new orders, they touched their highest level since May 2018.

“There’s no doubt there’s been a decline in trade policy uncertainty,” Clarida added. “To the extent that [uncertainty]was holding back investment, that should be a positive this year.”

The manufacturing data comes the same week as the Federal Reserve minutes from the last interest rate policy meeting were released on Wednesday, which suggest that the Fed may not move on rates for some time. After three consecutive rate cuts in 2019, the Fed kept rates unchanged at the end of January.

In addition, CNBC reported that the Fed “Holding the line on rates “would give the Committee time for a fuller assessment of the ongoing effects on economic activity of last year’s shift to a more accommodative policy stance and would also allow policymakers to accumulate further information bearing on the economic outlook.”