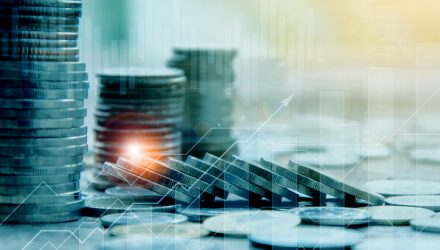 Consider This ETF For Strength in BBB Corporate Bonds

Heading into 2019, there were concerns that BBB-rated corporate bonds, debt residing within one to three notches of junk territory, were headed for a raft of downgrades. For most of this year, those concerns were allayed and after a recent bout of some concern for BBB-rated debt, markets are pricing in bullishness for this corner of the corporate bond market.

Up 11.24% year-to-date, the  ProShares S&P 500 Bond ETF (NYSEArca: SPXB) is a solid idea for investors looking to tap BBB-rated corporates. The fund seeks investment results that track the performance of the S&P 500®/MarketAxess Investment Grade Corporate Bond Index, which consists exclusively of investment-grade bonds issued by companies in the S&P 500.

“What’s happened in 2019 has been a big rally in BBB corporates, resulting in falling yields and strong total returns. Indeed, BBB bonds comprise the biggest portion of the corporate bond market, accounting for 58.2% of the $4 trillion of investment-grade debt outstanding as of Sept. 30, according to a report from Fitch Ratings,” reports Randall Forsyth for Barron’s.

At the end of the third quarter, SPXB held 1,000 issues from 92 issuers and had an effective duration of 8.21 years, according to issuer data.

Too Gloomy On Bonds

Data confirm that bond market observers were too gloomy on lower investment-grade bonds at the end of last year, giving rise to SPXB’s strong showing in 2019.

“The dire forecasts of chaos in this sector of the corporate bond market haven’t been borne out,” reports Barron’s. “According to Strategas Research Partners’ technical strategy team, led by Chris Verrone, the yield spread of corporates rated Baa (Moody’s Investors Service’s equivalent of BBB) over risk-free Treasuries hit a 52-week low this past week—about one-third less than the peak of two percentage points at the height of the Killer BBB worries in the summer of 2018.”

That’s good news for SPXB, which allocates just over its weight to bonds rated BBB+, BBB or BBB-.

Related: Dividend Stocks Aren’t as Pricey as Investors May Think

Of course, corporate bonds are riskier than U.S. government debt, but SPXB compensates investors for that risk with a 30-day SEC yield of 3.56%, which is almost 200 basis points above the yield on 10-year Treasuries.