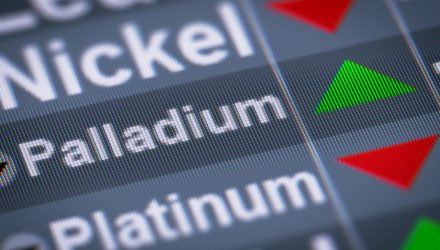 With regulations getting more stringent as the global movement towards cleaner energy gains momentum, its driving demand palladium which is used in emissions control devices like catalytic converters. China, in particular, is stepping up its demand for palladium as new regulations are forcing more consumption of the precious metal.

“The jump in demand is due to new regulations in China that will require at least 30 percent more palladium per vehicle, according to Reuters,” an article by Chris Teague noted in The Drive. “This adds extra weight to the already strong global demand that is expected to hit 10 million ounces this year and next. Supply is projected to fall 10 percent short of that number, as one of the world’s largest suppliers of palladium cuts back on output. South Africa produces roughly 40 percent of the world’s palladium supply and is reportedly reducing output by 13.5 percent.”

As simple economics cause supply to diminish while demand heightens, this bodes well for the price of palladium and its investors. ETF investors who want to get in on the palladium action can look to the Aberdeen Standard Phys PalladiumShrs ETF (NYSEArca: PALL).

PALL seeks to reflect the performance of the price of physical palladium, less the expenses of the Trust’s operations. The fund is designed for investors who want a cost-effective and convenient way to invest in palladium with minimal credit risk. Based on Morningstar performance numbers, PALL is up 43%.

Another byproduct of this shift to meet stricter emissions regulations is a move to electric-powered vehicles. As such, investors may also want to look at the  Global X Lithium & Battery Tech ETF (NYSEArca: LIT).