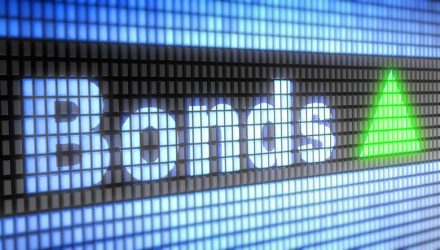 As reported by CNBC’s Seema Mody on ETF Trends, bond funds are on track for record inflows in 2019. A record $130 billion has come in as of mid-November, which would be the largest annual hall ever for fixed income ETFs.

To break it down as far as what to expect going into a new year, Seymour Asset Management’s Tim Seymour believes there are some big winners to look to. He points out international bonds, which has surprised people. Vanguard’s Total International Bond ETF (BNDX) serves as its global bond portfolio, and there was no global bond ETF just a few years ago. Currently, BNDX has pulled in $10 billion alone.

As Seymour continues, “It’s really across the board. It’s TLT, which is the long bond from iShares. It’s GOV, which is a shorter-term maturity government bond fund. I see all of this as a safety rotation play. It matches nicely with the big flows we’ve seen in two defensives equity plays like USMV from iShares, and into gold. So I see all of this as maybe the beginning of a bigger rotation into risk-off assets.”

In discussing his thoughts on the inflows, ETF.com’s Dave Nadig explained how the reach for yield is something that comes out of lower rates, so looking at these various bond funds, it’s about extending out the risk curve. As prices continue to get low, it will be about spread compression or widening.

Finding Credit Where It’s Due

It’s important for Nadig to look at to what extent the credit market is holding, and if anything, credit has tightened in the last couple of months, which is very bullish.

“If you have the ability to invest in more sophisticated fixed income products outside of just the US Treasury curve, I think that’s where the ETF world is changing,” Nadig states. “Fixed income investors can do almost whatever they want in credit and in bond land, and in Muni lands. One of the things that we’ve learned is that this is where ETFs are starting to find enormous growth opportunity.”

The number of negative-yielding bonds in Europe allows it to play into the discussion as well. Even with a new ECB president, things seem to be looking to stay on track. For Seymour, this shows the disconnect between retail investors looking at fixed income and something akin to giant insurance. There may be no choice in some cases, but to buy this negative-yielding debt, no rational retail investor wants anything to do with this.

As far as looking overseas for this continuing trend in 2020, Nadig responds by explaining how the Fed may or may not get a trade deal done, but it won’t mean a runaway global PMIs or industrial production ratcheting up. Things just need to stabilize.

“For global markets and definitely emerging markets, the most money is usually made when things go from terrible to just bad, and I think that’s what this dynamic is. But the rest of the world has outperformed.”

Emerging markets have been sending successive lower lows until the fall. In terms of top markets for next year, Nadig notes Brazil, based on a current tailwind from the central bank that’s done a lot of fiscal adjusting.

When bringing up the stronger dollar, Seymour explains how many are saying it can’t last forever, but he hasn’t seen the crack in where things are at signaling a need to change directions. Nadig agrees and believes that if a trade deal final comes early on, the dollar could be very range-bound. It’s really more on the Euro to determine how things could change.

Watch It’s Been a Banner Year for Bond ETFs: