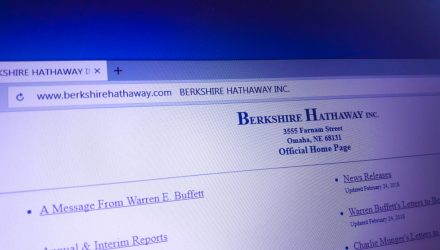 ETFs are a good way to access broad markets. Berkshire Hathaway is the latest to see the merits of the investment vehicle and began adding some S&P 500 Index ETFs into its portfolio mix.

Warren Buffett, whose Berkshire holds a record $128 billion in cash and U.S. Treasury bills, has been previously asked about why he didn’t put the company’s unused cash into an index fund, but the investment guru has stated before that Berkshire should hold some cash available to deploy quickly if the chance presents itself to make a big acquisition, even though he’d rather own an index fund than Treasury bills.

Buffett has famously said that the best investment option for most Americans can be found in a simple, low-cost index fund, highlighting S&P 500 funds as a good bet on America’s top companies and future outlook. His sentiments have also stumped many investors since Buffet is known for his stock picking abilities.

Berkshire joins other large institutions in adopting ETFs as a quick an easy way to deploy cash in the markets while minimizing the potential opportunity cost of holding money. With the growing popularity of ETFs, many large investors have come to enjoy the robust liquidity offered by many stock and bond ETFs.

Bloomberg Intelligence’s Eric Balchunas argued that ETFs are essentially being utilized as an alternative for derivatives contracts, estimating that this manner of institutional usage makes up about 5% to 10% of total ETF assets.

“SPY and VOO provide institutional investors the ability to stay in the market, while keeping their options open as they seek out individual stocks,” Rosenbluth told InvestmentNews.