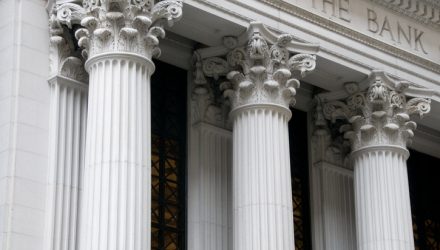 Bank ETFs Can Keep Surging in 2020

The SPDR S&P Bank ETF (NYSEArca: KBE) is higher by 26.51% year-to-date, an arguably surprising rally when considering it was accrued against the backdrop of three interest rate cuts by the Federal Reserve. Some market observers believe bank stocks and funds, such as KBE, can continue the good times in 2020.

Traders previously warned banks could face pressure as tepid market volatility could have contributed to more muted trading desk activity. Furthermore, the Federal Reserve has signaled its intentions to cut interest rates, which would further hurt the banking industry’s ability to generate profits from lending. However, third-quarter earnings from the sector were mostly steady, if not surprisingly strong.

“A stronger economy means more companies and individuals are likely to borrow from banks to invest or purchase,” according to Barron’s. “A steepening yield curve means banks can charge more from long-term loans than they pay for short-term debt, and the wider gap between the two rates would boost their margins. Cassidy expects the economic strength to continue in 2020 and yield curve to keep steepening, which should drive banks’ loan revenue up by about 3.8% from the previous year.”

While mortgage banking and cheap valuations could provide some support to U.S. bank, the sector performance largely depends on executive position credit conditions, the outlook for loan growth and their ability to cut deposit costs.