You are at:Home»Core Equity Channel»Bank ETF Stirs Ahead of Fed Meeting 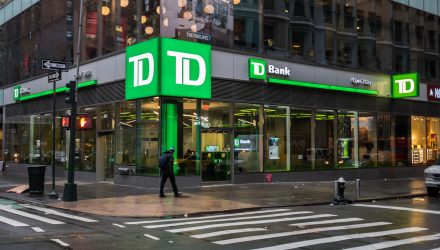 The SPDR S&P Bank ETF (NYSEArca: KBE) is higher by more than 20% this year, but ahead of today’s Federal Reserve meeting, the ETF had not gotten much attention from investors in a couple of months.

“The $2.3 billion SPDR S&P Bank ETF, ticker KBE, hadn’t seen a single day of inflows since January, but that changed Friday when investors deposited $38 million into the fund. The signs of life come after the ETF experienced its worst month on record in February,” reports Bloomberg.

Some market observers warned that banks may even be cutting back on lending as bankers are becoming more concerned over the late-cycle U.S. economy. Indicators such as credit-card charge-off rates have increased, though the rate leveled off over the summer. Still, it cannot be ignored that bank stocks are rebounding to start 2019

“The sudden investor interest comes ahead of this week’s Federal Open Market Committee meeting, in which the Federal Reserve’s so-called dot plot, plans for its balance sheet and economic projections will be in the spotlight,” according to Bloomberg. “Bank and financials ETFs at large are also wrestling with a potential breakout of their 200-day moving averages.”

Bank stocks are also inexpensive on valuation. By some metrics, the group sports its lowest earnings multiples since late 2011, underscoring the sector’s status as a value destination.

If yields on 10-year Treasuries rise and the yield curve steepens, bank stocks and ETFs could benefit as well.