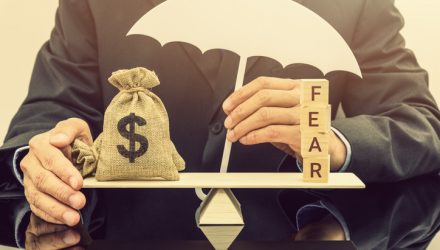 A new survey commissioned by a financial magazine, Sophisticated Investor, revealed the average American investor is more concerned about the US-China trade war over anything when considering the effects on their investment portfolio.

As mentioned, Sophisticated Investor is a financial magazine, and it’s dedicated to providing useful information and investment research to sophisticated and accredited investors. The survey they put together, which involved the opinions of 1,500 American investors between the ages of 35 and 65+, took on the challenge of determining which geopolitical or economic event is causing the most interest as far as investment and retirement portfolios.

The results certainly tie into a lot of what’s made the news in recent weeks, as the US-China Trade war has easily topped the list, as can be seen in the chart below. 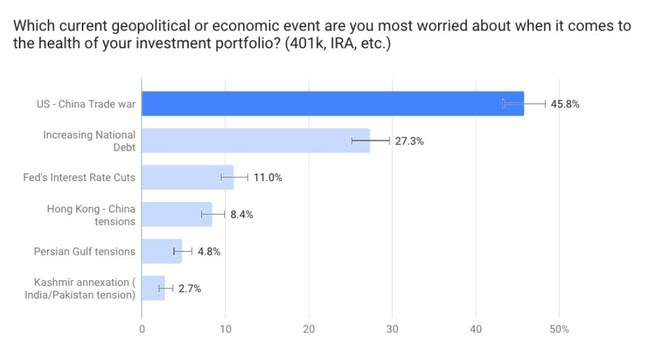 Which current geopolitical or economic event are you most worried about when it comes to the health of your investment portfolio (401k, IRA, etc.)?

As stated in the official press release, “According to the findings of the survey, when asked which geopolitical or economic event was most concerning when it came to the effects on investments, an overwhelming 45.8% of all respondents stated the US-China trade war. Interestingly, when demographic filters were applied to the survey results specifically to those between 35 and 44, the percentage increased to 47.6%, and more so with males of this demographic to 48.2%.”

The past couple of weeks have seen the financial markets endure tremendous volatility due to the escalating tensions between China and the US. Given all the attention that’s gone to this current trade war, it should not be seen as much of a surprise that almost half of the American investors in this survey cite this topic as their primary concern. Additionally, the consensus amongst analysts being that market volatility will continue until this trade dispute is solved, means opinions aren’t about to change.

“When it comes to the effects of this escalating trade war with the US and China on the average American’s investments, the most important thing is don’t panic. Only time will tell how long this will continue, but ultimately, a diversified portfolio is the best bet to keep one’s investments safe during economic uncertainty,” said Amine Rahal, CEO of Sophisticated Investor.

The increasing national debt came up second, as far as responses to this survey go, with 27.3%. This was most concerning to those in the 55 – 64 and older range. Applying additional filters, females within this age bracket pushed that number up to 34.1% or over a third of all women respondents approaching their retirement years.

The press release continues, “Considering that the Congressional Budget Office (CBO) just released a report predicting that under current law, budget deficits are projected to average $1.2 trillion a year between 2020 and 2029, the results of the survey are unsurprising. In order to cut any future deficits, numerous conservative groups have been pushing Congress to reduce retirement programs and federal health care – deemed mandatory federal spending.”

Looking down to the next most popular response from investors, the Fed’s interest rate cuts were a concern for 11% of those surveyed. The Fed cut interest rates for the first time since 2008 a month ago. Last week, Fed Chair, Jerome Powell, stated another rate cut in September was possible, based on the recent escalating global economic turmoil.

For more information regarding this survey, visit SophisticatedInvestor.com.