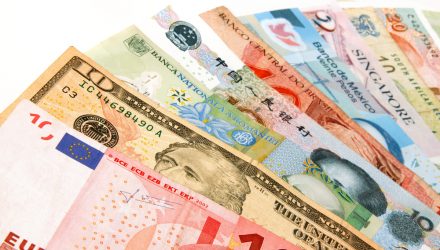 Emerging market bond exchange traded funds could continue to come under pressure with greater default risk as a surging U.S. dollar makes it harder for developing economies to pay back their debt.

Emerging market countries have about $34 billion in USD-denominated debt maturing over the next 12 months, Reuters reports.

Meanwhile, the U.S. dollar has strengthened, with the U.S. Dollar Index (DXY) up 4.5% over the past week to 102.5. All major emerging-market currencies have depreciated against the dollar since January 20, with the Russian ruble and Mexican peso plunging close to 20%.​

“The surge in the dollar is another blow to emerging markets,” Mitul Kotecha, senior emerging markets strategist at TD Securities, told Bloomberg. “The demand for the dollar has outweighed any hit to the U.S. currency from sharply lower Fed rates. EM assets will continue to struggle as investors steer clear of relatively risky assets and maintain a bias for safe havens.”

“A strong dollar is typically a headwind for emerging-market currencies and even more so for countries that are reliant on offshore dollar funding and have floating exchange-rate regimes,” Todd Schubert, head of fixed-income research at Bank of Singapore Ltd., told Bloomberg

It’s not just dollar-denominated debt that could be in trouble. Fifteen nations with more over $100 billion of Eurobonds outstanding exhibit an average spreads of at least 1,000 basis points over U.S. Treasuries, which many observers consider to be the threshold to be classed as distressed, Bloomberg reports.

Some developing countries are already showing defaults. Lebanon defaulted this month, and Argentina has begun restructuring talks with debt holders. Other African and Middle Eastern emerging countries are also exhibiting signs of distress. 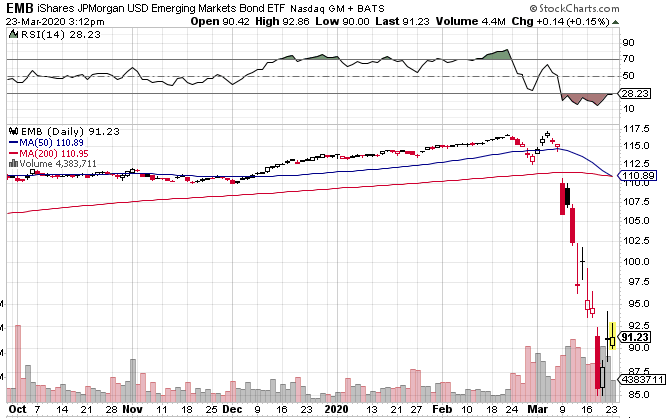