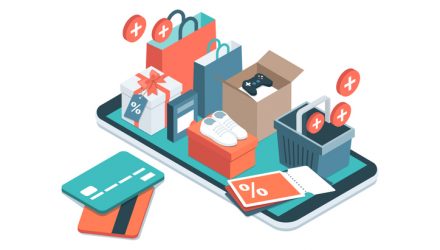 Online shopping is now the second-biggest component of the U.S. retail market after overtaking grocery stores and restaurants. Investors can also focus on this quickly growing segment through targeted exchange traded fund strategies.

According to the Commerce Department, consumer spending at non-store retailers, which includes online vendors like Amazon.com, increased by 1.7% in June and added to the overall increase in sales, Bloomberg reports.

Those online retail outlets accounted for 12.45% of the $520 billion national retail spend in June, compared to the 12.44% going to grocery stores and 12.41% at restaurants and bars, marking the first time that none-store retailers grabbed the number two ranking among the 13 categories that the Commerce data covers.

Overall, retail sales increased 0.4% last month as households ramped up purchases of motor vehicles and a variety of other goods. Vehicles and auto parts stores continued to make up the lion’s share of U.S. spending, about one dollar in five.

After accounting for seasonal adjustments, Americans spent $64.7 billion in non-store retailers over June, or about half of the overall 0.4% rise in retail sales.

The Amplify Online Retail ETF (NasdaqGM: IBUY) has been a popular thematic play that targets global companies that generate at least 70% of revenue from online or virtual sales. As the market environment shifts and changes, investors may also have the opportunity to capitalize on the growth potential of the e-commerce segment. Additionally, Amplify recently expanded its line with the Amplify International Online Retail ETF (NYSEArca: XBUY). XBUY is an index-based ETF that takes on foreign companies or those outside the U.S. that are expected to benefit from the increased adoption of e-commerce around the world.