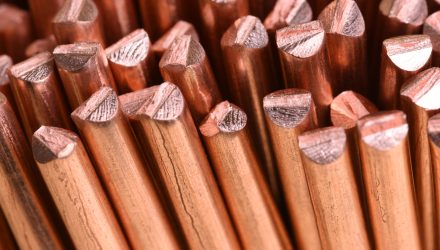 The iPath Bloomberg Copper Subindex Total Return ETN (NYSEArca: JJC) was one of 2017’s best-performing commodities exchange traded products. However, the benchmark copper ETP has not been able to hold those gains in 2018. Year-to-date, JJC is down about 10% and copper bears are seeing an opportunity to pounce on the red metal.

As is often the case with commodities, supply and demand factors are plaguing copper this year. While demand is not necessarily bad, abundant supply is seen plaguing the industrial metal.

“Copper is still down 8% so far in 2018 and the bellwether metal’s dimmer prospects is nowhere more evident than on derivatives markets and the shift in positioning of large-scale derivatives speculators such as hedge funds,” reports Mining.com. “While continuing to add to bullish gold bets (up 42% over the past week), on the copper market hedge funds have slashed long positions – bets on higher prices in future – to the lowest level since October 2016, back when copper was trading around $2.20 a pound ($4,850 a tonne).”

What The Data Say

Data suggest traders are comfortable getting bearish on the red metal and/or are scaling back bullish bets in significant fashion.