You are at:Home»Alternative ETFs»Copper ETPs Plunge on Weakening Global Outlook 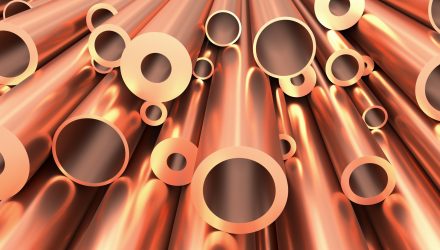 Copper-related exchange traded products plunged Wednesday, with the copper metal set to dip into bear-market territory, as concerns over a global economic slowdown weighed on the demand outlook.

Metals, especially copper, are considered an economic indicator by some investors due to their widespread usage in major economic activities, such as construction and manufacturing. The metal is also closely associated with strength in China, which makes up over half the world’s demand of certain industrial metals and is currently in a trade dispute with the U.S., the Wall Street Journal reports.

Market observers are concerned that tariffs will hobble the Chinese economy and diminish demand for materials have hurt metals, like copper. Market anxiety was renewed Tuesday after data showed Chinese spending on fixed assets like factory machinery and public-works projects hit its lowest point in nearly two decades over the first seven months of the year.

“There are still concerns of a slowdown in the second half of 2018 despite the stimuli, and the trade conflict with the U.S. shows no signs of cooling,” Vivienne Lloyd, senior analyst at Macquarie, told the WSJ.