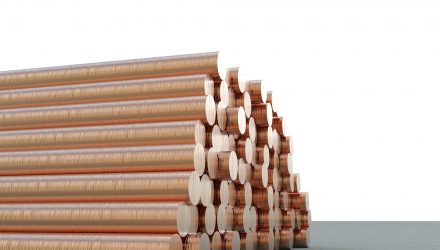 Copper ETN Could Lose Its Luster

Copper, the most widely followed industrial metal, is following other commodities higher this year. For example, the iPath Series B Bloomberg Copper Subindex Total Return ETN (NYSEArca: JJC) is higher by nearly 11%, but some market observers see challenges ahead for the red metal.

“Heavy users of copper saw a solid decline in output in January, boding ill for future demand for the metal in coming months,” according to IHS Markit. “The Global Copper Users PMI Output Index hit a near ten-year low at the start of 2019, indicating a downturn of the scale not seen since the financial crisis.”

While copper currently resides near its highest levels since July, some data points suggest the red metal could be primed for a near-term retreat.

“The Global Copper Users Output Index posted at 46.8 in January, indicating a solid decline in production at heavy users of copper,” according to Markit. “This was the lowest reading since April 2009, shortly after the global recession. A key factor was notably softer output growth at US copper users, though users in Asia and Europe continued to see declining production levels.”

Why It’s Important for Copper