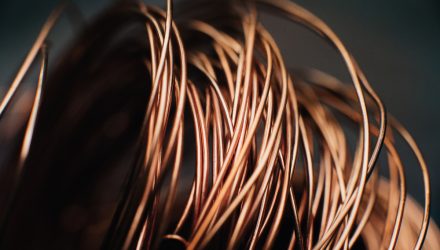 Copper-related exchange traded funds rebounded Friday after the copper market suffered through its worst weekly pullback in a year.

On Friday, the United States Copper Index Fund (CPER) rose 0.3% and the iPath Series B Bloomberg Copper Subindex Total Return ETN (JJC) was 0.7% higher. Over the past week, JJC declined 8.9% and CPER decreased by 8.6%.

Copper prices at one point in the past week dipped below $7,000 per metric ton for the first time since 2020 amid growing calls of a global economic recession. LME three-month copper futures were hovering around $7,170 on Friday.

Prices for the industrial metal strengthened Friday alongside a broader rally in risk assets after data revealed the lowest reading in the year on long-term inflation expectations, Bloomberg reported.

Friday’s rebound “seems like a risk on move for copper, following the SPX and some position adjustments,” TD Securities commodity strategy head Bart Melek said in a message. “The fundamental picture remains negative.”

The copper markets have been dragged down by two main concerns, including a recession across Europe in response to the growing energy crisis in the face of potential disruption from Russian supplies, and China’s biggest cities coming under another lockdown in face of rising COVID-19 cases.

It’s unlikely that China will “enter large scale lockdown measures again, especially as the government moves to set up more available mass testing PCR stations across the country,” StoneX analyst Natalie Scott-Gray said in a note. “The fear here is, that as new variants emerge, while their impact on health is less severe, their speed of contagion seems to grow.”

“The macro environment has definitely taken a turn for the worse,” Bank of America Corp. strategist Michael Widmer told Bloomberg. “Every region has slightly different dynamics, but none of them look particularly bullish at the moment.”

Looking ahead, some warn of further pain in the copper markets. For instance, Goldman Sachs Group Inc. this week projected copper to trade at $6,700 in the next three months, or 22% lower than its previous outlook.