A Concern For Tech ETFs
You are at:Home»Equity ETFs»A Concern for Tech ETFs Despite ‘QQQ’ Up 18% YTD? 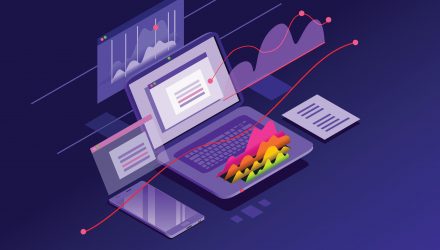 The PowerShares QQQ (NasdaqGM: QQQ), which tracks the tech-heavy Nasdaq-100 Index, is up more than 18% year-to-date. However, some market observers are concerned about the small number of stocks driving the technology sector’s 2018 upside.

Additionally, some analysts opine that the benchmark’s significant technology overweight leaves it vulnerable should tech stocks fall out of favor. Due to tech’s ascent this year, QQQ’s exposure to the sector has increased while its consumer discretionary weight has been mostly steady.

“The Nasdaq is now up almost 25 percent over the past 52-weeks, while the broader S&P 500 is up 16 percent in that same period. Yet Colas noted that only a handful of super-sized tech companies — such as Amazon and Apple — have been instrumental in pushing the group higher,” reports CNBC.

After ranking as 2017’s best-performing sector, technology is in the same spot this year, prompting scores of money managers to overweight large-cap tech. Additionally, there is some concern about the lack of contribution to tech’s 2018 rally from Chinese tech and Internet companies. That group has been sagging along with the broader emerging markets complex.

The Invesco China Technology ETF (NYSEArca: CQQQ) is down 22.35% year-to-date.