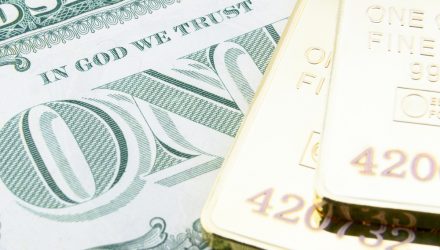 Gold prices got an additional boost after the Federal Reserve raised the federal funds rate by an additional 75 basis points, confirming its aggressive stance in tamping down inflation through the second half of 2022.

Gold started the year strong before aggressive interest rate hikes pushed the dollar through the roof, reversing gold’s upward price trajectory. Now, with a recession looming amid the rate hikes, gold could be gaining again as a safe haven asset.

The World Gold Council (WGC), however, acknowledged that the macroeconomic environment could keep gold from breaking out, thus lowering demand after a strong first half.

“Some macroeconomic factors such as aggressive monetary policy tightening and continued U.S. dollar strength may create headwinds, but upside surprises for gold investment remain firmly on the table,” the WGC said via a Kitco News report. “The WGC sees demand relatively flat by year-end.”

Nonetheless, the WGC didn’t rule out that a breakout could occur as gold’s safe haven status reinforces itself.

“Although inflation may start to tail off in H2, the supply situation in many commodity markets remains precarious, and renewed spikes can’t be ruled out. Such an environment would further highlight the safety of gold,” the WGC added. “After all, gold’s relative performance remains solid in 2022, buttressing its diversification benefits compared to other hedges.”

Physical gold has its tangible benefits, but there can be issues regarding storage for safekeeping purposes. An investor who is more inclined to take a hands-off approach will want something that provides exposure without the storage hassle, which is where exchange traded funds (ETFs) could be of benefit.

One ETF to consider that mimics gold prices but doesn’t require the additional task of storage is the abrdn Physical Gold Shares ETF (SGOL), which seeks to reflect the performance of the price of gold bullion. Fund facts per SGOL’s fact sheet: