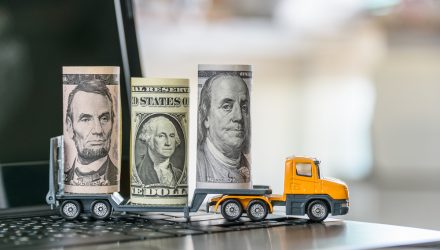 The most considerable energy-focused equity ETFs in the U.S. have taken almost $6.7 billion in net outflows since May in a combination of profit-taking and fears over when, or if, the country falls into recession.

Retail traders, however, have kept their inflows steady.

Estimates of retail action from VandaTrack show individual investors added more than $386 million in non-leveraged energy-focused equity ETFs with more than $500 million in assets from May to late July, while the same group of funds took net outflows of nearly $6.7 billion. 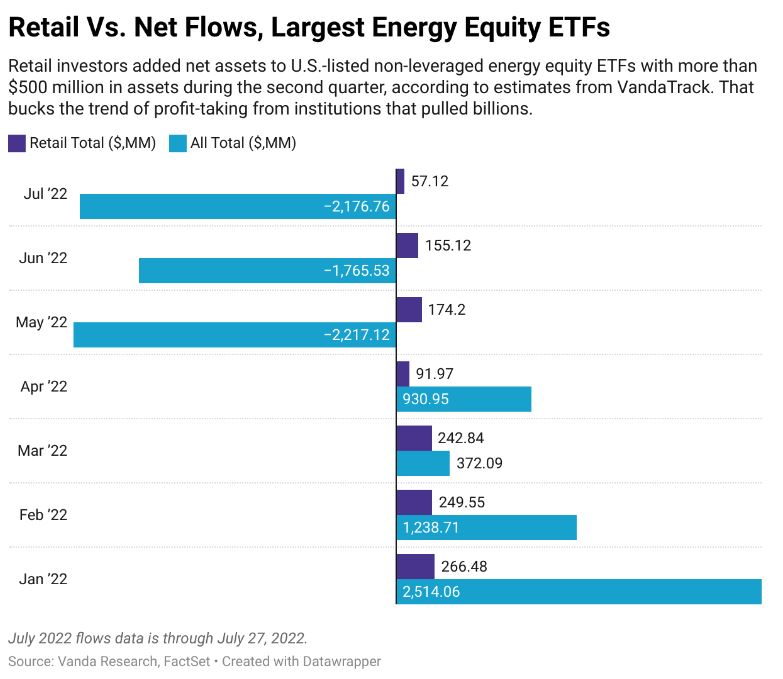 The group of 16 funds is now a net negative for flows to the tune of $1.64 billion on the year. Large institutions drove inflows in January and February as an inflation hedge, which likely slowed their purchases and sold off profitable positions as Russia’s invasion of Ukraine spiked oil prices and made energy a crowded trade.

Institutions then started a net sell-off in March as stubborn inflation, and the vow of the Federal Reserve to fight it with steep hikes fueled recession fears, dampening the demand outlook for oil. The Energy Select Sector SPDR Fund (XLE) has fallen from its year-to-date high of 67.86% in early June to a 40% return as of Monday, and the spot price of West Texas Intermediate oil as of 2 p.m. Eastern Time Monday was around $94 per barrel compared to its most recent June high of $121 per barrel.

But retail investors, as measured by VandaTrack, have put a net $1.24 billion into the largest equity energy ETFs year-to-date, without a single month of net outflows.

While it’s difficult to pinpoint the psychology behind a mass of retail traders, the group may be engaging in the dip-buying that kicked off in the frothy market environment of 2021 and hoping for a rebound.

Todd Sohn, a managing director of technical strategy at Strategas Securities, said the consistency of the trade likely indicates retail dollars are being allocated to the momentum of energy rather than the broader implications of slowing global growth.

“If true, it’s curious to me that the behavior has seemingly shifted from large-cap growth, ARK, etc., over the last few years to energy, which had been out of favor for ages,” he said.

It’s also possible that individual traders are reacting slower to macroeconomic trends, including getting on board with energy’s sharp rise in the earlier part of the year.

“While institutional investors may be quicker to act, it can take time for retail investors to gain comfort with a sector’s relative strength,” said Todd Rosenbluth, VettaFi head of research.