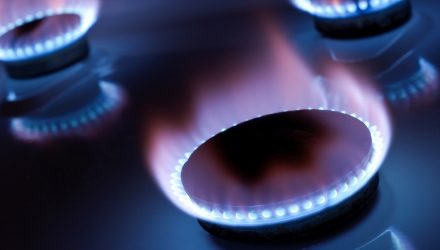 The United States Natural Gas Fund (UNG) rose 0.7% on Friday and increased 25.3% over the past month. Meanwhile, Nymex natural gas futures were up 1.0% to $9.28 per million British thermal units.

“Natural gas prices this year have hit 14-year highs, and we don’t think that’s the end of it. We think we could even see a super-spike potentially this winter that we would put them back to 20- or 25-year highs,” Truist director Neal Dingmann told CNBC.

In other words, Dingmann projected natural gas prices could still surge 60% this winter upward to the $12 to $15 range.

Specifically, the production capacity of liquid natural gas is around 10% lower than usual, Market Insider reported. Meanwhile, natural gas production declined by 1 billion cubic feet per day, according to Bloomberg.

Looking ahead, LNG exports will continue to sap away at U.S. supplies. The U.S. has committed to providing Europe with LNG as Russia withholds energy supplies.

The main reason for the natural gain this week is due to “sharply reduced flows from Russia amid a backdrop of only average stockpiles,” Tyler Richey, co-editor at Sevens Report Research, told MarketWatch.

“Even with inventories sitting near their five-year average right now, the fact that flows from Russia through Nord Stream 1 are trickling at just 20% of capacity means that even modest demand at the start of the winter will quickly begin to draw supply down,” Richey added. “Below-average temperatures could very well see supply quickly depleted.”

The U.S. Freeport LNG export hub, which accounts for 20% of U.S. LNG exports and was previously shut down due to a fire, will also be reopening and resuming exports in October.

“Without Russian natural gas, Europe is going to have a very hard time satisfying even subdued demand this year,” Richey said. Without a resolution in Ukraine, “prices in Europe are likely to continue to new record highs in the months ahead, which will subsequently buoy U.S. market prices as well.”