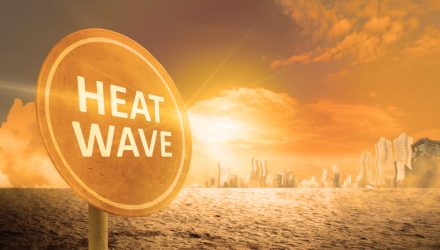 Natural gas-related exchange traded funds are rallying as a heatwave across the U.S. fuels electricity demand for air cooling.

The United States Natural Gas Fund (UNG) rose 0.8% on Thursday and jumped 19.4% over the past week. Meanwhile, Nymex natural gas futures were trading around $7.93 per million British thermal units before breaking back above the $8 level earlier in the day.

Fueling gains on Thursday, the U.S. Energy Information Administration revealed only 32 Bcf of natural gas was raised in storage for the week ended July 15, which was well under expectations amid an ongoing inventory drawdown in face of persistent heat across the U.S., Natural Gas Intelligence reported.

Over the past week, temperatures were above average for most of the country, especially in areas across Texas and the south, further adding to electricity demand for cooling.

Excessive heat “jump power burns and hit production at the same time,” according to an analyst on The Desk’s online energy platform Enelyst. It “feels like the dead of winter” when looking at storage in some areas of the U.S.

Natural gas prices are rebounding after the recent sell-off, following a fire at Freeport LNG’s export terminal, which sapped supply heading out of the U.S. toward Europe but ended up bloating U.S. markets instead.

“The weather has been so hot that all this demand that we thought would be lost from Freeport, we haven’t lost it at all,” Eli Rubin, senior analyst at the energy consultant EBW Analytics, told the Wall Street Journal. “The entire country is running their air conditioners.”

Looking ahead, the persistent heat will help keep air conditioners running. A forecast model shows the hottest temperatures in four decades for this week and next as determined by cooling-degree days.

Meanwhile, natural gas will remain high as alternative electricity sources, such as coal and hydro-power, continue to fall. Utilities previously turned to coal to generate electricity, but the U.S. has been retiring many coal-powered facilities in response in response to climate change policies. Additionally, drought conditions in the west have diminished hydro-power output.