You are at:Home»Featured»Colombia ETFs Climb as Presidential Election Runoff Heats Up 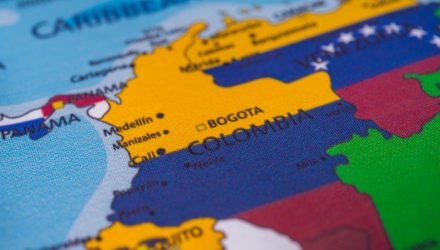 Colombia country-specific exchange traded funds surged on Tuesday as market participants rejoiced in anyone taking a share away from senator Gustavo Petro’s vote in the presidential elections.

Construction magnate Rodolfo Hernandez defied the odds and secured a spot in the presidential election runoff, diminishing the chances that leftist senator Petro will become the next president, Bloomberg reported.

Meanwhile, the Colombian peso appreciated as much as 4.9%, its biggest intraday gain in almost 14 years.

Market observers have grown wary of Petro after the senator proposed to overhaul the private pension system, hike taxes, and phase out the production of oil and coal, the emerging economy’s main exports.

On the other hand, Hernandez, a 77-year-old former mayor of a provincial city, is largely unknown to many, but he still appears as a safer bet for business interests compared to Petro. Hernandez has stated he will crack down on corruption and wasteful spending, and he argued that Colombia has to pay its debts. He also wants to reduce the value added tax to 10% from 19%.

“The ‘anyone but Petro’ considerations will prevail,” Edwin Gutierrez, head of emerging markets sovereign debt at Aberdeen Asset Management PLC, told Bloomberg. “Hernandez stands a better chance of beating him in the second round.”

So far in the presidential election runoff, Petro received 40% of the votes in the first round, compared to 28% for Hernandez. Nevertheless, many of the other candidates that failed to go in to the runoff are expected to support the businessman in a so-called anti-Petro alliance.

Investors are also finding solace is that fact that neither presidential candidate will have a majority in congress, so any extreme proposals will be up against some checks and balances.

“Looking at the breakdown of votes and assuming that a large share of voters are driven by ideology, Hernandez certainly has a much easier path,” Alvaro Vivanco, head of emerging markets and ESG strategy at Natwest Markets, told Bloomberg.