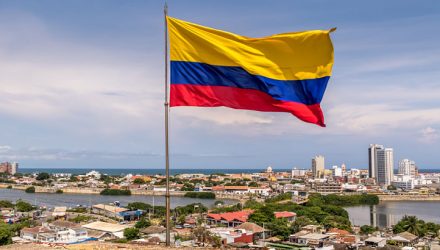 The Global X MSCI Colombia 20 ETF (NYSEArca: GXG) is up just over 6% year-to-date, making it a laggard among Latin America single-country exchange traded funds and putting it well off the pace being set by the MSCI Emerging Markets Index.

Slumping commodities prices are weighing on the Colombian economy and its financial markets. The country is a major producer of industrial and precious metals as well as oil and agricultural commodities, including coffee.

In recent years, Colombia’s production growth turned it into South America’s third-largest oil producer behind Brazil and OPEC member Venezuela. However, some of Colombia’s headline-making oil finds have not been as lucrative as previously hoped and Ecopetrol lacks the offshore heft to compete with other major global integrated oil companies. Colombia’s central bank has been proactive in lowering interest rates, which could spur economic activity.

“The lower interest rate in June 2017 has followed a 25-basis-point cut in the May 2017 meeting. The surprising rate cut came as four members voted for the 50-basis-point cut, whereas three voted for a 25-basis-point cut in the June 2017 meeting. Currently, interest rate levels are at their lowest level since December 2015. The supply-side inflationary shocks are expected to remain low, as inflation dropped for 12 consecutive months as of June 2017. Inflation currently stands at 4.0% in June 2017 as compared to 4.4% in May 2017,” according to Market Realist.