You are at:Home»Alternative ETFs»Coffee ETN Perks Up as Brazil Anticipates Smaller Crops After Bumper Year 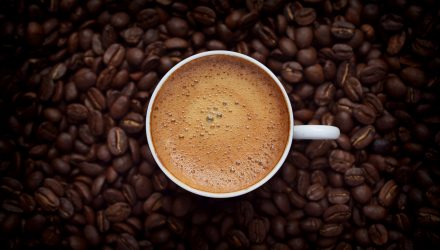 Brazil, the world’s largest grower of coffee, anticipates its coffee crop to total between 50 million and 55 million 60 kilogram bags, or a 15% decline from the previous year’s record harvest of 62 million, the Financial Times reports.

Nevertheless, the median level of the Brazilian agricultural agency Conab’s projection of 52.5m bags is still a record for the off-year and comes in larger than any on-year output, apart from the 2018 bumper crop.

Coffee producers around the world have been warning that current prices are not profitable and could push smaller farmers to cultivate other crops. The bumper crop year that dragged coffee prices to their lowest levels in 12 years have led to coffee growers abandoning farms in Guatemala while Colombian farmers switched over to cocoa production, which is processed into cocaine.

Coffee Prices Hover at $1.06 Per Pound

Due to the declining production, coffee prices are currently hovering at around the $1.06 per pound level, compared to the $1.20 to $1.50 range needed for farmers in many of the Latin American countries to turn a profit.