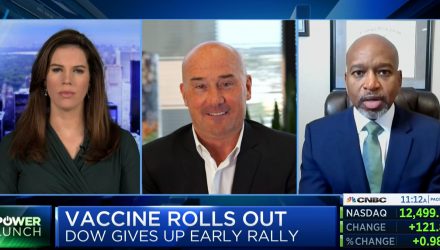 As recent events could be leading to a shift in the status quo, one may still expect layoffs while considering an upside in earnings for companies. Tom Lydon, ETF Trends CEO, and Kevin Nicholson, Riverfront Investment Group global fixed income co-CIO, joined this week’s “Power Lunch” on CNBC with host Kelly Evans, to discuss how they’re watching the markets as the Dow gives up its gains despite a COVID-19 vaccine.

As mentioned, while there did seem to be a gain, it would appear that the prospect of revisiting a lockdown is starting to guide what may come next. Lydon notes how there is still going to be struggling ahead. With that in mind, it’s important to look at what has worked.

“When you look at flows so far this year, in the ETF area, there have been a lot of flows in technology-related ETFs, thematic ETFs, and actively managed ETFs in certain sectors that are specific to working at home,” Lydon notes.

Thinking of the average small business that has had to adapt to this new environment, there has been a lot of success among those matching that embrace, particularly when it comes to tech. The Zooms and Docusigns of the world are the areas that can be championed in that regard.

Pricing In The Vaccine

Nicholson jumps in to add how he feels the vaccine has been priced into the market, as well as the pricing in of earnings for 2021. However, there has been no pricing in, as of yet, for the labor market, which is slowing down immensely. Moving into 2021, more companies will be paying attention to their profits, and they’re going to try and become more efficient.

That will make jobs lighten up, meaning more layoffs. At the same time, there could be an upside in earnings because companies become more profitable and more efficient.

Looking at all of this and the amount of global debt, Nicholson believes there’s going to be a cap on the yields seen in the fixed income market. Plus, with the idea that the Fed is going to put a pin in things as far as their QE program and the buying of shorter-term treasuries. So, essentially, because there’s so much negative-yielding debt globally, there’s going to be a cap, and the Fed will make a slow pivot to the longer end of the curve.

When asked about how bullish to feel when considering the hottest parts of the market, including possible tech plays, Lydon points out the possibility of Tesla joining the S&P by the end of this week. He then brings up some ETFs to consider, including XNDK, LIT, and ARKQ, which factor Tesla as a big holding. It comes down to a way of relocating funds as things head into the next week.