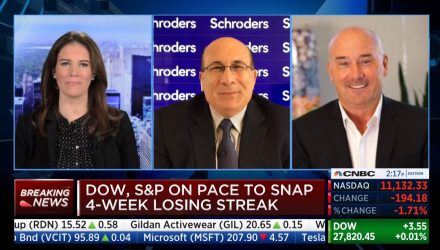 Looking at the various events of the week that revolve around the approaching general election, the renewed hopes of a new stimulus package, and now the sudden announcement of President Trump testing positive for Covid-19, there is a lot this could mean for an already volatile market. ETF Trends CEO Tom Lydon spoke with Kelly Evans on CNBC, along with Ron Insana, Senior Advisor to Schroders North America, about the tech space, the lack of a clear trend, and what that could mean, based on current data.

Something notable right off the bat pointed out by Lydon, is how despite the announcement regarding Pres. Trump, the Dow is still positive. It shows how while the stock market is not insensitive, the significant things going on in Washington D.C. are not having as large an effect on the market as the underlying areas.

This indicates that, while close to another earning season, there still are many positives to look at. A lot of momentum has continued with the Direxion Work From Home ETF (WFH), for example, along with the ETF space in general. Things are currently on track for another record year.

Lydon adds, “Specifically in technology, communications, consumer discretionary, and the fact that the average American and the average business owner has embraced technology in a way that they’ve pivoted for the better.”

That in mind, while technology has faced a bit of a slump in recent weeks, Lydon does note how the overall trend fo the year has been mostly positive in the technology space. The FAANG stocks, in particular, have performed so well that it’s held big tech together, despite some recent moves.

He notes, “They’ve had a little bit of relaxation, but going forward, these companies that were the stalwarts of the last ten years, as far as growth, have done very well in this work from home environment with cloud computing, communication, and all the things that we need in today’s new normal, in order to operate.”