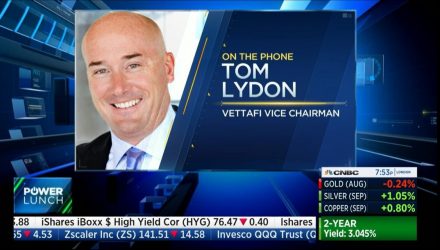 It’s a big week for corporate earnings as investors look for indicators on how the rest of the year will go. Tom Lydon, vice chairman of VettaFi, appeared on CNBC’s “Power Lunch” to offer his investing takes on Roku, Paramount, and Disney.

Roku (ROKU) is expected to face challenges as competition from both Netflix and Disney’s ad-supported option for customers could impact its market share.

“It is 85% off its high, the question is can it go down further,” Lydon queried. “We know Netflix is diving into that space; Netflix needs subscribers, and Roku has them, so if there was ever a buyout, that’s a possibility there.”

Roku has found big belief in its potential from the likes of Cathie Wood, who speculated that its stocks could move as high as $240 over time, whereas the majority of analysts have a target closer to $150.

“I think there’s going to be a rebound at one point,” Lydon said.

Pivoting to discuss Paramount (PARA), while the company currently has a 3.8% dividend and is 75% off its highs, Lydon explained that the most valuable asset the company has are the March Madness streaming options.

“The news of the NFL that was just announced — they’re going to launch their own streaming, NFL Plus — is probably a great concern to Paramount because they depend tremendously on the NFL deal. I think it’s a hold right now,” cautioned Lydon.

Disney (DIS) is another company that offers streaming services deals that will likely be impacted by the independent streaming service the NFL is creating. ESPN Plus covers major sports, such as the NFL, and with Disney raising prices on the streaming services by nearly $10 a month (43%) during an economically challenging time for consumers, it could see a potential drop-off.

“If the NFL is going solo on streaming, what about Major League Baseball, or basketball, or hockey, or the NCAA? All those organizations could join as well, and again, although it is 50% off its high, P/E is way too expensive; that’s a sell at this point,” said Lydon.