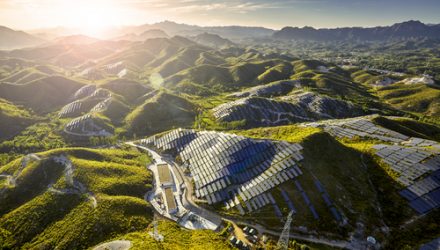 China has one of the most ambitious renewable energy agendas in the world, particularly when measured against other developing economies.

That makes sense because the world’s second-largest economy is a massive polluter and a major consumer of fossil fuels — many of which China must import. Beijing typically wants to be in the driver’s seat as an exporter instead of relying on another country’s goods, indicating that China’s renewable energy transition is a viable investment thesis.

Investors can tap into this with exchange traded funds, including the KraneShares MSCI China Clean Technology Index ETF (KGRN). KGRN, which follows the MSCI China IMI Environment 10/40 Index, is relevant as China prioritizes grid parity in an effort to bolster renewables capacity.

“The onshore wind and solar power sectors in China have entered grid parity for new projects going forward, a credit positive for the sectors because it means they are becoming more commercially viable and competitive against other fuel sources. Energy storage is critical to the sectors’ continued development but it will take time for storage technology to become commercially viable,” noted Moody’s Investors Service.

One of the key factors in the renewable energy investing thesis is how much governments are willing to commit to the effort. Investors in the U.S. are quite familiar with that notion, and it’s applicable in China as well. In fact, policy there is overtly supportive of clean energy because some companies have direct ties to the government.

“Policy support to the sectors remains underpinned by their role in meeting China’s emissions reduction targets. Large players, which are generally state-owned enterprises (SOEs), will benefit in this transition because of their crucial role in China’s decarbonization plans,” added Moody’s.

As KraneShares noted, China’s output of global renewable energy is expected to reach a world-leading 43% over the next five years, perhaps opening the door to investment opportunity with energy storage companies. Moody’s concurred with that assessment, and that could be a long-term boon for KGRN.

“We expect energy storage facilities in China will see exponential growth over the next four years, underpinned by policy support, and exceed its target of 30GW total storage capacity by 2025. Future substantial declines in costs will be key to boosting investment in energy storage,” concluded the research firm.