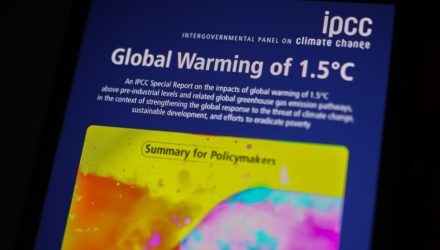 The Intergovernmental Panel on Climate Change has been set to release its third report in a series that looks at the state of carbon emissions, climate change implications, and what is needed to reduce emissions to levels that will not be catastrophic for global communities. The meeting for the third report is the longest on record; it was set to close on Friday, but talks extended through the weekend to today as countries push back and try to find agreements on emissions reductions, particularly in regards to fossil fuel use, reports the BBC.

The first two reports focused on both the causes of global warming as well as the impacts it would have; this third report focuses on the necessary steps to mitigate global warming and has been the most contested of the three reports thus far. For the last two weeks, UN scientists have been working to construct the finalized report, which will set very clear guidelines on emissions in the coming years and are having to go line by line as countries continue to disagree on exact wording.

The report is expected to recommend the use of carbon removal technology and the transition away from fossil fuels, and give firm recommendations between now and the year 2030 on reducing emissions and limiting global warming. In previous studies, IPCC scientists have warned that in order to keep the increase in global temperatures to 1.5 degrees Celsius this century, emissions need to be cut in half by 2030.

Developing countries and major fossil fuel producers have shown great reluctance to curtail emissions; developing countries in particular are often major emissions-producers while making products that are used by developed countries. Several countries are also pushing back against the increasing use of nuclear power written into the report.

Previous concerns that a push for carbon capture technologies would result in some of the major emitters relying on the technology instead of working to cut heavy emission-producing practices have resulted in a reticence to really push for these practices. Scientists have now said that the global warming crisis is dire enough that carbon capture will be needed in addition to major emissions reduction to reach sustainable living goals.

Investing in the Emission Transition With KRBN