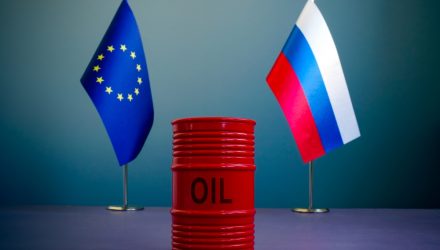 If Russian sanctions are a chess game, the European Union is about to put a check on the Russian economy as the bloc seeks to bring its full power to bear. With the EU rapidly pivoting away from reliance on cheap fossil fuels from Russia, temporary reliance on heavy-emitting fuel sources is expected to increase in the short term while industries work to find alternative fuel sources and transition to low and net-zero practices under the REPowerEU plan.

New sanctions that senior EU officials are expected to sign off on soon would ban insuring any ships that carry Russian oil; because very few companies will agree to carry uninsured loads, it is one of the strongest tools the EU can use within its sanctions arsenal, reported the Wall Street Journal.

This move was utilized 10 years ago to great success — by banning insurance on oil exports from Iran, the EU forced negotiations with Tehran about its nuclear program. It’s particularly powerful because the vast majority of oil traded globally is insured by European companies.

For now, imports through pipelines will still be allowed, but it’s expected that the embargo will account for roughly 90% of what had previously been imported from Russia by the end of 2022. This is set to have an outsized impact on the Russian economy, which currently brings in $10 billion monthly from the EU for oil products and crude oil.

As for the energy needs of Europe, the EU recently released its REPowerEU plans, which include short- and long-term transition plans all focused on emissions reductions and increasing decarbonization efforts. While short-term use of coal and other heavy emissions-producing fuel sources is expected to increase as energy prices soar, the EU anticipates easing and replacing this with low- and zero-emissions alternatives as early as 2027.

See also: What Europe’s REPowerEU Means for the Energy Transition

KraneShares offers both a targeted investment opportunity into carbon allowance futures in the EU and a broader, globally focused one that includes the EU allowances market futures as part of its exposure.

The KraneShares European Carbon Allowance ETF (KEUA) offers targeted exposure to the EU carbon allowances market and is actively managed. The fund’s benchmark is the IHS Markit Carbon EUA Index, which tracks the most-traded EUA futures contracts, the oldest and most liquid market for carbon allowances.

The market currently offers coverage for roughly 40% of all emissions from the EU, including 27 member states and Norway, Iceland, and Liechtenstein. KEUA has an expense ratio of 0.79%.

The KraneShares Global Carbon ETF (NYSE: KRBN) offers a global approach to investing in carbon allowances markets and diversity in its exposures. KRBN tracks the IHS Markit Global Carbon Index, which follows the most liquid carbon credit futures contracts in the world.