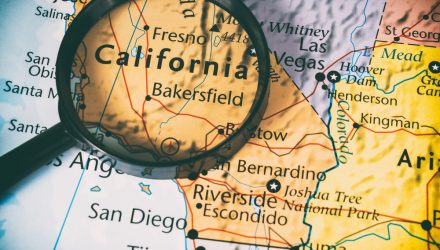 Investors who are interested in capitalizing on the growing focus of carbon emissions in the ongoing fight against climate change can consider an exchange traded fund strategy targeting the burgeoning Californian carbon allowance market to access a rapidly expanding marketplace that was historically inaccessible to retail investors.

In the recent webcast, The California Carbon Opportunity: An Advisors Guide to Carbon Investing, Eron Bloomgarden, partner at Climate Finance Partners, highlighted the million-year anomaly that has the world focused on a growing climate change crisis as scientists are confident that humans are the primary cause of rising global temperatures.

According to the Fourth National Climate Assessment, the U.S. government’s official report on the impact of climate change, many independent lines of evidence support the finding that human activities are contributing to recent climate change since the 1950s. Specifically, the scientific community has found that atmospheric carbon dioxide (CO2) levels have increased from approximately 270 parts per million by volume (ppmv) during preindustrial times to the current 408 ppmv observed in levels that exceed any observed over the past 800,000 years. Furthermore, they argued that a 40% increase in atmospheric CO2 levels since the Industrial Revolution is mainly attributed to human activities, specifically the combustion of fossil fuels.

In response to this growing threat, Bloomgarden argued that there is also an opportunity for the savvy investor. He noted that global energy demand will continue to grow by 50% by 2050, and currently 80% of the world’s energy use is fossil fuels.

“Reaching net zero emissions requires a fundamental transformation of the global economy – and implies essentially the rebuilding of substantial portions of our energy and land use infrastructure in the next 30 years,” Bloomgarden said.

“Climate is a differentiated and non-correlated source of return. Understanding its impact and implications is an investment imperative and is highly relevant to all investors,” he added.

As a way for investors to ride this shift in energy priorities and access a new green market, Bloomgarden highlighted the emissions trading system, ETS, to reduce carbon emissions. Economists generally believe if there is an appropriate price for carbon emissions, the free market may optimally adjust to provide the best mix of goods and services while accounting for environmental damage caused by pollution from carbon emissions.

For the United States, Luke Oliver, Managing Director and Head of Strategy, KraneShares, underscored the California Carbon Allowance Market, or CCA, which launched in 2012, and now covers around 75% of the state’s greenhouse gas emissions. California joined the Western Climate Initiative (WCI) in 2007 and linked its program with Québec’s in January 2014.

The CCA program plans to reduce carbon levels to 60% of 1990 levels by 2030 and achieve carbon neutrality by 2045. The cap will reduce by about 4% per year to achieve this objective. The program also has a floor price (auction reserve price) that rises by 5% plus inflation adjustment each year.

Oliver also pointed out that the CCA market exhibits low correlations to other traditional investments, which may further help investors diversify their investment portfolios. Specifically, carbon allowances exhibit a 0.335 correlation to U.S. equities, 0.115 to bonds, 0.312 to commodities, and 0.295 to oil.

Financial advisors who are interested in learning more about the California carbon opportunity can watch the webcast here on demand.