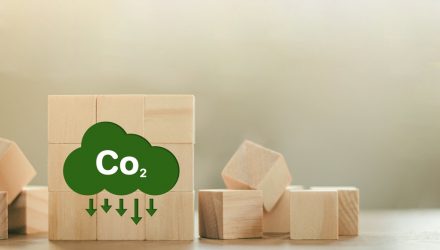 Geopolitical risk and rising global inflation dealt hits to carbon allowances markets in 2022, even within the U.S. Despite volatility and drawdowns, the U.S. carbon markets ended the year having largely recovered and look to be well positioned for growth in 2023, according to guidance from KraneShares, the first asset manager to create an ETF with exposure to global carbon allowance markets in 2020.

The California cap-and-trade market that includes California and Quebec began in 2022 with allowances trading at $34.60, but Russia’s invasion of Ukraine in February created global shockwaves, sending many advisors and investors scrambling into risk-off positions. While carbon allowances have demonstrated non-correlation to other asset classes such as equities, they are still considered a more volatile asset class because of their nascent nature.

In March, California Carbon Allowances (CCAs) dropped to $24 before recovering to $32 the following month. Since then, they have been on a slow decline as the Federal Reserve continues to hike interest rates aggressively in the U.S., increasing recession risk. CCAs closed the year out trading at $30.34.

The Regional Greenhouse Gas Initiative encompasses several states in the Northeast but remains small with contention from some member states on whether they wish to continue to participate in the program or not. RGGI prices traded at $14.12 to begin 2022, well above the cost-containment reserve price (a reserve of allowances set a specific price that can be sold to approved entities to hedge against higher costs), and a subsequent price correction in March brought prices down to $12.50. RGGI prices jumped back to up $14.20 in April and ended 2022 at $14.26.

This year looks to be a promising one for U.S. carbon markets from a regulatory perspective.

“For the Cap-and-trade systems, 2023 is well positioned for a monumental year. Beginning in January, Washington will start its Cap-and-trade and Low Fuel Standard program, and the California and RGGI programs will undergo reviews,” wrote Luke Oliver, managing director, head of climate investments, and head of strategy at KraneShares, in a recent blog post on the Climate Market Now blog.

California is set to officially tighten its emissions goals, upping emissions reductions from 40% compared to 1990 levels by 2030 to 55% within the same period. The increasing pressure will mean a reduction of future allowances auctions as the California Air Resources Board looks to bring the cap-and-trade program in alignment with the new regulations, likely to be passed by the end of the year.

On RGGI’s side, the third program review is set to be released this fall, and Virginia and Pennsylvania are likely to settle their internal court battles over membership in RGGI in 2023: “the resolution of the issue may bring stability to the market,” according to Oliver.

International developments are likely to spur reaction and change in the U.S. as well beginning this year.

“The EU’s cross-border mechanism (CBAM) will start its introductory phase in October 2023. In its initial phase, importers will have to report emissions embedded in their goods. The carbon charge on imports into the EU will spur global carbon markets,” Oliver wrote. “It may also incentivize the US Federal Government to plan out a national carbon market.”

The KraneShares California Carbon Allowance ETF (KCCA) offers targeted exposure to the joint California and Quebec carbon allowance markets and will benefit from the aggressive push to reduce emissions as rapidly as possible. KCCA is benchmarked to the IHS Markit Carbon CCA Index, which includes up to 15% of the cap-and-trade credits from Quebec’s market.