You are at:Home»Equity ETFs»Citigroup Earnings Show Decline in Fixed-Income Revenue 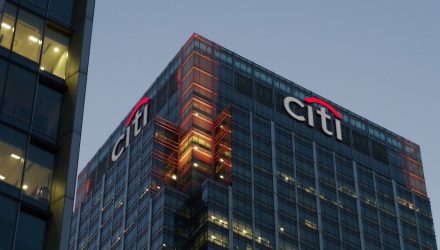 Citigroup posted mixed results on its second quarter earnings report Friday as the bank outperformed in earnings per share, but underperformed on revenue, including a decline in fixed-income.

Forecasts for Citigroup earnings were slated at $1.56 per share, and the bank surpassed that, posting a $1.63 EPS figure. In addition, Citigroup netted $4.49 billion in income, besting last year’s second quarter results of $3.9 billion in net income.

One of the reasons for the underperformance in revenue was in its trading operations. Citigroup pointed to a challenging market environment, particularly in the fixed-income space where revenue fell by 6% to $3.1 billion.

“The biggest decline in our fixed-income revenues year-over-year was really in spread products, and that was really concentrated in securitized markets,” Chief Financial Officer John Gerspach said during a conference call. The company had expected “equities would be a stronger performer and we’d see some challenges in fixed income given the overall market conditions and that’s exactly what played out.”