You are at:Home»Featured»Cisco’s Rare Miss Weighs on Telecommunications ETFs 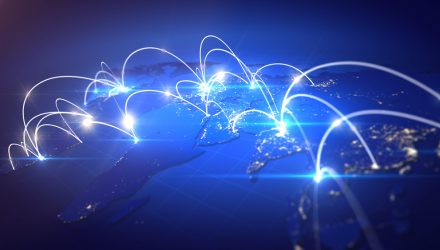 The iShares U.S. Telecommunications ETF (IYZ) was 2.3% lower on Thursday.

The technology heavyweight known for its networking and security equipment and software revealed revenue for its fiscal third quarter ended April 30 was flat year-over-year at $12.8 billion, or 4% below Wall Street’s consensus projections and marking the second time in at least five years that the company’s revenue missed expectations, the Wall Street Journal reports.

Further dragging on Cisco shares Thursday, the midpoint of Cisco’s projection for the current quarter suggested that revenue of $12.7 billion, or 8% below Wall Street analysts’ target.

The falling revenue has nothing to do with demand since Cisco has a product backlog that expanded by about $1 billion from the second quarter. However, the reported product revenue only rose by about $95 million in that period.

Chief Executive Officer Chuck Robbins attributed the weak revenue and outlook on ending business in Russia after the country’s invasion of Ukraine and the zero-tolerance COVID-19 lockdowns in China, which further exacerbated the supply chain problems and availability of key components that were already in short supply. Consequently, Robbins calculated that the inability to timely receive power supplies cost the company around $300 million in revenue for the quarter.

“In the near term, we believe that as they begin to ship, we’re but one company with one product we’re trying to get out of there,” Robbins told CNBC. “But we do believe there will be a rush to get product out. We saw their industrial production numbers way down, and their export numbers way down.

“When they open up ports, they open up airways, there’s going to be some competition for it,” Robbins added. “And so we believe there’ll probably be some short-term pressure and then once they get it out onto the oceans, we could see another issue in LA or in the other ports like we’ve seen where ships are backed up trying to get in. So that was all built into how we thought about our guide, because we’re just concerned that if they open, it’s not going to result in shipments as fast as we would like for it to be.” Robbins added.