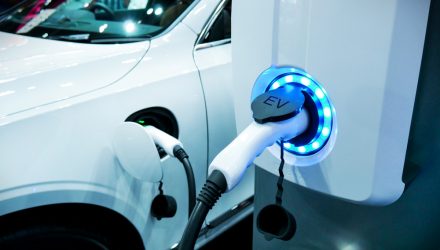 Contemporary Amperax Technology Co., Ltd (CATL) is the global leader in electric vehicle batteries and is the main supplier for companies such as Tesla, NIO, Ford, BMW, and more. CATL is also a Chinese company and trades on the Shenzhen Stock Exchange, meaning that access to it is limited for most investors and requires access to China’s A shares market, which KraneShares provides through various ETFs.

CATL was founded by Yuqun Zeng, who grew up a poor farmer until high marks on his college entrance exams led him to ultimately graduate as one of the top engineers from Shanghai Jiao Tong University, a top school in China. Zeng became the second most wealthy individual in China, surpassing even Alibaba’s founder, Jack Ma, and built his company’s headquarters in the same rural area as his hometown.

The company started in 1999 as a spin-off from Amperex Technology Limited producing batteries for consumer electronics before EVs took off in 2011 in China. CATL was established in 2012 and has grown by leaps and bounds as EV battery demand took off in China, the world leader in EV production and sales, and then spread globally.

“China is now the world’s largest country for EV sales, with 3.3 million EVs sold in 2021, accounting for around 50% of global sales. CATL gradually established its position as a leading supplier and now holds nearly 50% of the market share in China,” wrote Derek Yan, CFA director of investments at KraneShares, in a recent paper. 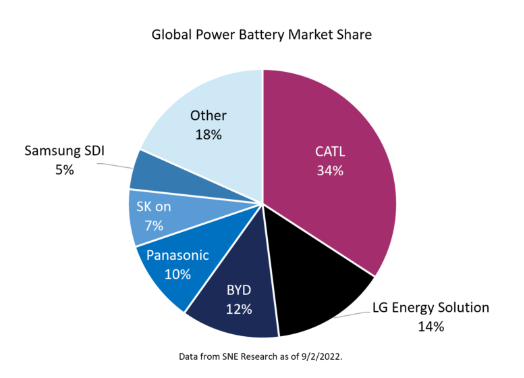 CATL is currently predicting that its Q3 profit could triple as EV demand continues to grow at a healthy pace in China. According to the China Last Night blog, electric vehicle sales in China now make up 27.1% of all new car sales as of September, and production has increased 110% while sales have increased 93.9% year-over-year.

The company is expanding aggressively, building factories in North America and Europe that will allow it to increase its total annual capacity to 500GWh by 2025 and 800GWh by 2030. Its partnership with companies such as Tesla and Ford as a core battery supplier have the company positioned in a continued place of prominence as EVs continue to gain market share.

CATL has built its success on a foundation of innovation and efficiency: in 2021, its central factory in Ningde was awarded as a Global Lighthouse Factory by the World Economic Forum, which recognizes manufacturers for utilizing advanced technologies in their operations. Its factories blend artificial intelligence, advanced analytics, 5G, edge and cloud computing, and more to run efficiently, maximizing productivity while retaining safety and quality standards. 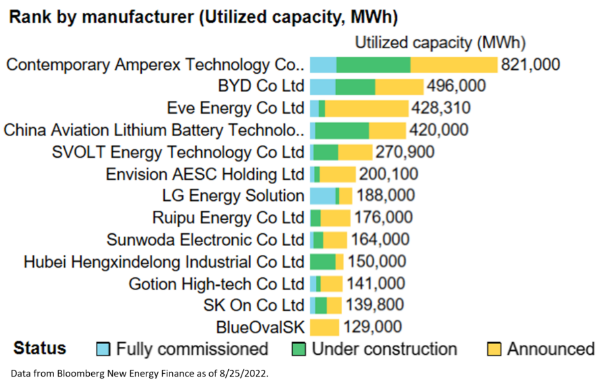 Why CATL is Positioned for Success

In a world that has been plagued by supply chain issues, CATL has been playing to its home team advantage: China currently holds over half of all battery-grade metal refining capacity globally across every major raw material used in battery production. This includes cobalt (73% of the world’s supply), nickel (68%), manganese (93%), and 100% of the graphite that lithium-ion batteries use.

CATL has taken that one step further, though, and is looking long-term.

“The firm also invests in mineral resources and battery recycling to hedge the rising cost of raw materials. CATL’s battery recycling unit, Pubang, can recycle 99.3% of Nickle, Cobalt, Manganese, and 90% of Lithium from used batteries,” wrote Yan. “When the battery market reaches a certain size, the industry could rely on recycling for most raw materials.”

CATL is a company firmly committed to innovation and remaining on the front-end of the technology curve, spending a healthy portion of its revenue on R&D. The research team at the company is comprised of more than 10,000 individuals, and CATL has logged 4,445 patents worldwide as of 2021.

“We believe more local Chinese companies like CATL will become leaders in the next phase of global growth. CATL and other companies listed on the Shanghai or Shenzhen Stock Exchanges are classified as China A-Shares, which are in the process of being fully included by MSCI in global indexes,” Yan explained, but most investors only have exposure to China through U.S. markets or Hong Kong.

“They are under-allocated to China A-shares, despite them accounting for half of the market cap of Chinese equities. Thus, China A-shares show a very low correlation to global equities,” Yan wrote.

KraneShares currently offers exposure to CATL through various ETFs with different investment strategies. The KraneShares Bosera MSCI China A Share ETF (KBA) invests in Chinese A-shares from the MSCI China A 50 Connect Index, an index of large cap companies across sectors in China, and CATL is the second largest holding at 7.02% weight. The KraneShares Electric Vehicles and Future Mobility ETF (NYSE: KARS) offers a good solution for investors looking to capture the potential growth of major EV producers globally and tracks the Bloomberg Electric Vehicles Index, and CATL is at top 10 holding at 3.43% weight. The KraneShares MSCI China Clean Technology Index ETF (KGRN) capitalizes on investing in clean technology in China’s growing economy — CATL is the top holding at 8.68% weight.