The health care industry in China is expected to expand rapidly in the coming years with a rapidly aging population, growing infrastructure, and China’s growing role in the global health care system through contributions and collaborations that its biotech companies are embarking on. Delisting fears and market volatility have caused a pullback that has resulted in valuation opportunities to buy into a sector that KraneShares believes will experience strong growth in the coming years.

China’s healthcare industry was hit by regulations in May 2021 and experienced much of the volatility and drawdown in share prices that the technology sector experienced as well, explained Anthony Sassine, CFA, and Henry Greene in a paper for KraneShares.

The KraneShares MSCI All China Health Care Index ETF (KURE) had a difficult year, losing 46% of the previous 12 months and is down 34% year-to-date, led by concerns and uncertainty surrounding regulations. The biotech and life sciences industries in China fell into the crosshairs after WuXi Biologics was added to the unverified list in Q4 2021 by the U.S. Because of COVID-19 travel restrictions. End-use verification of materials wasn’t able to be performed by U.S. inspectors and the company was added to the unverified list, creating strong bearish sentiment toward the industry by investors.

“However, China’s premier Liu He’s speech on March 15th regarding dealing with China’s economic issues, including delisting, ignited a rally in China’s Health care sector, led by biotechnology and life sciences companies. WuXi’s strong earnings report also fueled the rally further,” explained the authors of the paper. “Will this be the turning point we have been looking for?” 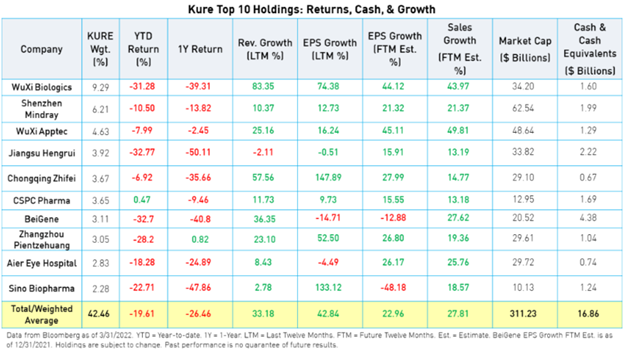 The Impact of the U.S.

WuXi Biologics has reassured investors that the issues surrounding the inability of the U.S. to verify the end-use of sensitive materials imported from the U.S., like bioreactor hardware and filters, are easily solvable once inspectors can travel to China. It’s a company that is expecting revenues to grow 45% by next year.

WuXi Biologics is the top Chinese Contract Research Organization (CRO), a type of company that pharmaceutical businesses rely on for R&D, manufacturing, and more. It’s one of the most lucrative types of businesses globally according to KraneShares.

Chinese biotech companies have also learned from the rejection of Innovent’s Tyvyt, a PD-1 cancer treatment, by the FDA this year — which cited a lack of diversity in the populations used in trials for its rejection. The underlying suspected primary reason for its rejection was that similar treatments already exist within the U.S., as drugs and treatments that have no U.S. equivalent are typically approved quicker and easier if it can be shown that the need exists.

“Global operations and multiregional clinical trials (MRCTs) are now a must for companies looking to globalize. Also, for a drug to have a higher chance of approval, China biotechnology companies will need to focus on new drugs unavailable in foreign markets, that could become first-in-class drugs or, at least, a close second to a top-tier drug in the phase testing process,” wrote the authors.

Delisting concerns are a real factor for Chinese healthcare and biotech companies, and some of those companies have taken matters into their own hands. BeiGene has changed its audit process that has put a U.S. listed auditor, Ernst & Young, in charge of auditing its U.S. operations with the Chinese version assisting.

There is hope that the U.S. and China regulatory bodies will be able to come to an accord. The speech given by Liu He in March saw the Chinese health care sector rally strongly.

There are more regulations in China’s pipeline that look to address the online health care industry, but KraneShares believes they will be manageable impacts, particularly for some of the biggest companies within the space. Overall, KraneShares believes that the Chinese government is committed to the potential of the marriage of the internet and health care and the benefits to much of its rural populations would be exponential.

“In times of high market stress, it is easy to forget about the bigger picture. However, the long-term potential of China’s health care sector did not change. We believe now could be an opportune time to add exposure to high-quality companies currently selling at a discount,” wrote the authors.