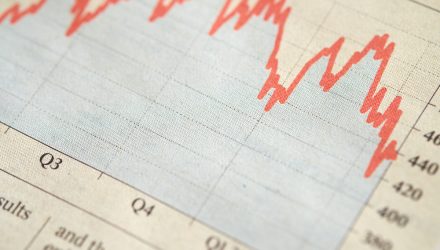 Under the Hood of the Quadratic Deflation ETF (BNDD)

BNDD has seen $123.23 million in flows since the beginning of December, according to FactSet data, an impressive number considering that the fund only launched September 21, 2021. More investors are seeking hedges, and BNDD offers an opportunity to have both asymmetric upside potential and portfolio diversification.

Debt is piling up for many Americans, especially due to the pandemic, with a shrinking population and lower birth rates meaning that federal funding costs are being paid for by fewer people. The stimulus enacted during the pandemic helped stave off severe economic consequences of shutdown at the time, but it also caused the federal debt level to be above 100% of GDP; the current debt ratio is one that is only seen during times of war.

BNDD is offered by KFA Funds, a KraneShares company, and is a fixed income, ESG-focused, actively managed ETF that seeks to benefit from lower growth, a reduction in the spread between short- and long-term interest rates, deflation, and lower or negative long-term interest rates. It invests in U.S. Treasuries as well as options that are tied to the shape of the U.S. interest rate swap curve. Quadratic Capital Management is the sub-advisor of the fund and its active manager.

BNDD seeks to hedge against deflation risk while creating positive returns at times when the U.S. interest rate curve flattens or inverts. It invests in Treasures with different maturities either directly or via ETFs that invest in Treasuries. The options the fund uses are tied to the U.S. interest rate curve and include long options, long spreads, and butterflies (an options strategy that uses both bear and bull spreads) in an attempt to limit loss by the fund.

The options carried within BNDD are traded in the over-the-counter (OTC) market, which are typically more flexible in their terms but can carry higher counterparty risk. This access to the OTC fixed income market is generally not available to investors directly and is a unique opportunity. By utilizing options, the fund is able to be leveraged, but BNDD is only open to a maximum options position loss equal to its options premiums, which is only up to 20% of the fund’s assets.

This fund utilizes an ESG lens that is exclusionary of any securities involved in extreme event controversies, controversial weapons, UN global compact violations, civilian firearms, thermal coal extraction, and tobacco. The fund also falls under the umbrella of impact investing within ESG, as the sub-advisor is a registered small/minority business enterprise as well as a majority woman-owned firm.