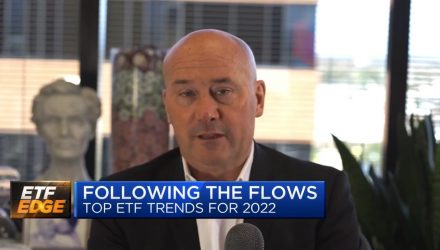 Tom Lydon appeared on the CNBC Halftime Report and ETF Edge earlier today, with Dominic Chu filling in for regular host Bob Pisani. Lydon was joined on ETF Edge by GraniteShares founder and CEO Will Rhind to discuss the flows into China ETFs and other hot ETF topics.

With ETFs such as the KraneShares CSI China Internet ETF (KWEB) seeing flows, Lydon noted that “all eyes are on China. The Chinese government is on a mission. They are looking for a rebound.”  With COVID restrictions relaxing, more people are going out and spending money. The government is also supporting the real estate space. Lydon added that “we know that China doesn’t want to disconnect from the capital markets, so all the saber-rattling we’ve seen from the SEC wanting to delist Chinese stocks – probably not going to happen.”

He sees incredible valuations in China, with the aforementioned KWEB down 80% this year while also recently beginning a sharp climb to 50% above its lows.

The ETF World Beyond China ETFs

China funds aren’t the only corner of the ETF world seeing surging strength. A more transparent Fed combined with tax loss harvesting plays and redemptions have led to a fixed income uptick, according to Lydon.

He also noted that commodities remain compelling. “We’ve seen metals and miners really kick in in the last couple of months,” Lydon said.

Cathie Wood’s ARK suite has had its share of performance woes, but making the case that investors who had an allocation to an ARK product could use the current prices to increase it, Lydon said, “why wouldn’t you think about nibbling away with the great valuations we have today?”

Looking Back at the Second Biggest Year For ETFs Ever

Chu pointed out that 2022 was a monster year for ETFs, with over $600 billion in flows. When asked if the industry can maintain that momentum and which sectors stand the benefit the most, Lydon said, “when you look at the vehicle of choice, it really has been ETFs for a variety of reasons.” Aside from tax loss harvesting, which has pushed many investors out of mutual funds and into ETFs, Lydon also thinks that big players who had traditionally focused on mutual funds coming into the ETF space continue to provide momentum. He noted that companies like Dimensional Funds converted their mutual funds into ETFs. “I think we’re going to see a lot more of that as well.”

Options overlays have also been big, providing strong yields and downside protection for funds such as the popular JPMorgan Equity Premium Income ETF (JEPI) and the Nationwide Nasdaq-100 Risk-Managed Income ETF (NUSI). “If you can replicate an index while at the same time getting a 7%, 8%, 9% yield – that’s pretty attractive,” Lydon said.

All the Single Stock ETFs

Chu called attention to the rise of single-stock ETFs such as the Direxion Daily TSLA Bear 1x Shares (TSLS).

GraniteShares has a suite of single-stock ETFs coming online. “More people are managing more of their own money,” Rhind noted, explaining the rise of the popularity of single stock ETFs. When asked if there’s a risk of investors falling into a “gambling mindset,” Rhind noted that these kinds of products have been around for a while and that these products are designed for active traders. “For the right investor, the right trader, they provide that exposure people are looking for.”

Speaking to the perks of these kinds of products, Lydon said, “It just gives more options.” He noted that sophisticated traders have used these products well and most people understand that they need to be careful with leveraged products.

In the U.S., for a long time, only two companies have been able to launch leveraged products. “The U.S. has had some issues with updating regulations around leveraged funds,” Rhind said, “that wasn’t the case in Europe.”

With oil taking a tumble and gold regaining its luster, Chu noted that commodities are looking at some complicated cross currents. Rhind sees a longer-term bull market, particularly in commodities that will assist in the transition to low-carbon fuel, but recession headwinds are still top of mind for many investors.

Lydon noted, “when you look to the next three to five years, we may be in higher inflationary times, which tends to bode well for commodities.”