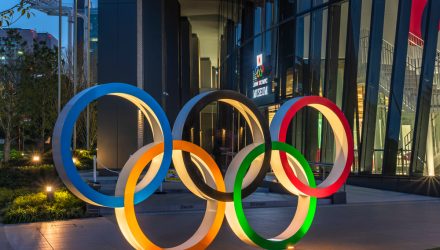 The Olympics Highlight Innovations in China, Invest With KGRO

With the Olympic games set to open February 4, 2022, in Beijing, there has been a flurry of activity as athletes from all over the world congregate in the closed loop system that China has created to try to prevent the transmission of COVID. Part of that solution is keeping athletes separate from the general public, not necessarily an easy feat considering the events are spread across three different venues that are hours apart from each other.

One of the primary solutions has been to use the world’s first self-driving high speed train, buried deep beneath the surface and passing through the Badaling Great Wall Station, reports CNN. The train connects the two main cities of Beijing and Zhangjiakou and is an engineering success that came with a lot of very precise calculations and work.

Because the train passes so close to the Great Wall, the tunnel was built 335 feet below ground, is 7.45 miles long, and has the largest and deepest underground high-speed railway station. Chinese engineers used electronic detonators that exploded with precision timing that was accurate to the millisecond, the first time the technology had been utilized in China.

The high-speed train makes the usual three-hour trip between the two cities in just 56 minutes and can travel at speeds of 217 miles per hour. The train is outfitted with 5G, intelligent lighting, and 2,718 sensors constantly transmitting data real-time while the train runs autonomously, though an operator is on board at all times.

Investing in China’s Innovation With KGRO

For investors looking for broad investment into innovation within China, the KraneShares China Innovation ETF (KGRO) is a good solution. The fund invests primarily in five ETFs that capture the high-growth industries and sectors within China.

KGRO allocates 30% into KWEB, an ETF that tracks the CSI Overseas China Internet Index, which measures the investable universe of equities of China-based, publicly traded companies that are listed outside of mainland China and primarily involved in the internet and related sectors.

25% of holdings are invested in KURE, an ETF that tracks the MSCI China All Shares Health Care 10/40 Index, an index that measures the performance of Chinese companies in the healthcare sector.

15% of allocations go to KFVG, an ETF that tracks the CICC China Technology Leaders Index, an index that contains the 30 largest Chinese companies by free-float market cap whose business is in 5G and technology-related sectors, such as semiconductors.

The remaining 10% is allocated into KSTR, an ETF that tracks the SSE Star Market 50 Component Index, an index that includes the 50 largest companies by free float market cap that are listed on the SSE STAR Market.

The fund carries an expense ratio of 0.99% and is actively managed.