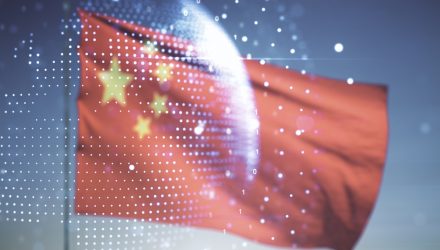 The Advisor’s Guide to the Current Chinese Stock Sell-off

China’s leadership concluded the 20th National Party Congress in Beijing over the weekend in which President Xi Jinping cemented an unprecedented third term and nominated several allies to high-ranking positions. The moves have prompted a wave of stock sell-offs, largely from foreign investors that view the appointments and the outlook for Mainland China with marked concern, a concern that could be unwarranted according to KraneShares.

“Last Wednesday felt like a capitulation day in Hong Kong and U.S.-listed Chinese stocks, though today certainly has the hallmarks of a blow-off,” wrote Brendan Ahern, CIO of KraneShares, on the China Last Night blog.

The strongly negative sentiment and reaction seem to be largely dominated by foreign investment for now. The Hang Seng Index has a significant percentage of international investors compared to onshore markets. Foreign investors pulled out 17.9 billion yuan ($2.5 billion) Monday in the largest single-day outflow for the Stock Connect since its inception reported the WSJ. 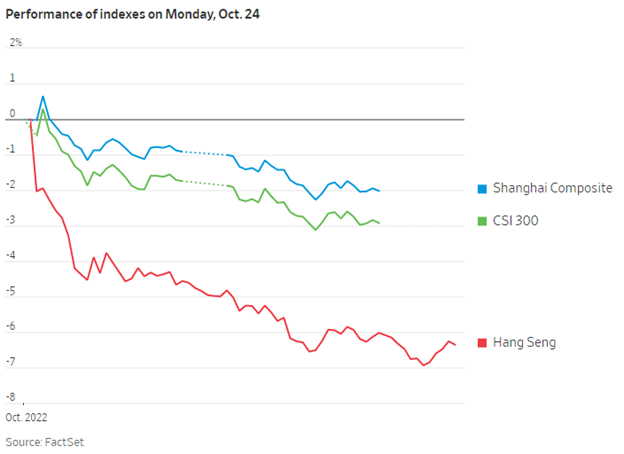 Mainland China stocks did fall on Monday, but the dip was markedly less than what was experienced in Hong Kong, with the benchmark CSI 300 down -2.9% and the Shanghai Composite down 2%.

China announced a 3.9% GDP growth for the quarter, up from 0.4% last quarter and higher than analyst expectations of 3.3%. Industrial production in September came in much stronger than expectations at 6.3% compared to the 4.8% anticipated, though retail sales in September dropped to 2.5% compared to August’s 5.4%.

So why have markets responded so poorly to the conclusion of the Communist Party’s meeting? The answer is a multi-faceted one but likely largely orients around the appointments that Xi made and the perception of greater government involvement in the economy via its state-owned enterprises, key points made in speeches during the Congress meetings.

Several of the key officials replaced, including Vice Premier Hu Chunhua, were perceived to be more liberal and market-oriented, and underscore Xi’s vision for a China that is more egalitarian; more focused on “high-quality development” for the economy, driven by increased state control; continued focus on “self-revolution” for the Communist party; and further positioning China as a major global player.

“Xi was dominant before; he is even more dominant now,” Mark Williams, chief Asia economist for Capital Economics, told WSJ. “The official line appears to be that China has a leadership that will be united and stable. I suspect it will prove rigid and inflexible.”

It’s this perception of a more heavy-handed involvement by the Chinese government in the economy that could potentially have spooked investors, or it could have been the appointment of officials such as Shanghai party secretary Li Qiang. Li is known for his strict COVID-19 lockdown policy, and his appointment as number two in the party could be prompting concerns about stricter China lockdown policies going forward when many investors were hoping for a potential easing in the future.

The Division Between Foreign and Mainland China Sentiment Grows

The divestment of Chinese stocks by foreign investors Monday continues the trend of divergence between Chinese company performance and stock price performance as Monday’s exodus appears to be one driven largely by sentiment and fear.

“We had anticipated President Xi would fill key posts in the Politburo and Standing Committee with allies, though the market was surprised by the move, which is as shocking to me as the market’s negative move,” wrote Ahern. “The market appears to be assuming that the new leadership will make all the wrong moves despite President Xi’s last Sunday speech, which mentioned modernization 85 times versus 47 times at the 19th Party Congress five years ago.”

Mainland exchanges were down but significantly less than Hong Kong, and there was strong buying of Hong Kong stocks by Mainland China investors. The difference in sentiment is strongly seen on the ground, with individuals living in China reflecting an optimistic outlook as captured by Xiabing Su, cultural analyst at KraneShares, in a series of street interviews conducted in Shanghai at the onset of the 20th National Party Congress.

The difference in perception is not a new one between Mainland China and the outside world, but it’s a division that has just grown a bit wider with this latest round of “blow-offs” by foreign investors despite a continued strong performance from Chinese companies.