You are at:Home»China Insights Channel»How One Hurricane Demonstrates the Cost of Global Warming in the Energy Sector 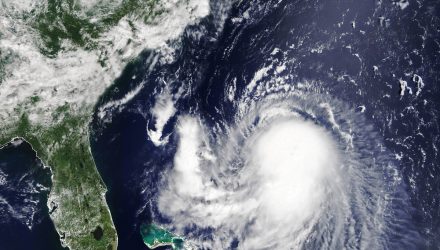 Hurricane Ida slammed into Louisiana at the end of August and then continued to wreak havoc across the U.S., shutting down pipelines along the coast and in the Gulf of Mexico that supply a sizeable portion of natural gas to the rest of the country. The resulting domino effect has culminated in skyrocketing global carbon allowance prices in a concerning chain of events that gives hints about the costs of a warming world.

Luke Oliver, Head of Strategy at KraneShares, broke down the causes and effects of Ida’s landfall on the energy sector in a recent paper for the KraneShares website. He explained that 94% of Louisiana’s gas production was shut down in anticipation of and then subsequently because of the hurricane.

With Louisiana being a major producer and exporter of natural gas for the U.S., natural gas prices have increased 23.66% since Ida became a named threat on August 26th. Nearly 80% of oil and gas production is still out of commission in the region, reflecting a loss of 1.5 million barrels of oil and 1.7 billion cubic feet of gas in the markets daily. Year-to-date, natural gas prices are up 111.34% nationally, which is the highest that prices have been in the past two and a half years.

The shortage of natural gas is having a large environmental impact on the energy sector as increasingly more producers are having to resort to coal combustion, a process that emits twice the amount of carbon dioxide as burning natural gas. In order to compensate, energy providers are being forced to purchase more carbon allowances as offsets, driving the prices up.

It’s a trend that is being seen elsewhere globally, albeit for different reasons. Europe’s natural gas prices are up 250.77% year-to-date, partially due to shortened U.S. supply but also because of an entangled supply and demand network.

Reserves in Europe are 20% below their averages for this time of year, compounded by reduced supply from Russia via the Yamal-Europe pipeline. While there is speculation as to the why behind the reduction by Russia, if the issue is not resolved before winter, it could lead to drastically higher natural gas and carbon prices. Potentials for harsher winters become increasingly more common place as global warming effects spread, and these concerns are all contributing to rising natural gas prices and an increased focus on the carbon allowance markets.

Carbon allowance prices have hit record highs recently; European Union Allowances (EUA) futures hit $73 per ton while futures on California carbon allowances (CCA) were $25 a ton. These two, along with the Regional Greenhouse Gas Initiative (RGGI) on the Eastern seaboard comprise the whole of the IHS Markit Global Carbon Index (GLCARB) for now.

GLCARB is the underlying index for the KraneShares Global Carbon ETF (KRBN) and is up 59.59% year-to-date, with 8.2% of that being since Ida formed.

“The increasing effects of climate change not only highlight the need for carbon prices to rise in order to catalyze change but simultaneously highlights the fragility of global supply chains which further challenges emission reduction. As climate policies tighten, increasing the scarcity of carbon allowances, and the natural gas supply becomes stretched, we could see continued strength in carbon allowance prices,” Oliver wrote.

Investing in Carbon Offsets with KRBN