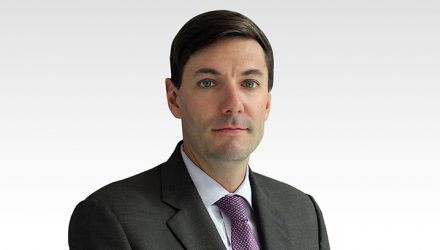 A History of KBA and KraneShares With Brendan Ahern

KraneShares has established itself over the years as a firm synonymous with investment into China and is the issuer of the immensely popular KraneShares CSI China Internet ETF (KWEB), a fund that tracks the major tech growth companies in China. VettaFi sat down recently with Brendan Ahern, CIO of KraneShares, to discuss the roots of the company and its foundation in creating exposure to China for foreign investors through the launch of its flagship fund, the KraneShares Bosera MSCI China A Share ETF (KBA), which has since changed its name to the KraneShares Bosera MSCI China A 50 Connect Index ETF.

KraneShares was founded in 2013 by its CEO Jonathan Krane, who saw the potential growth of China’s middle class and all the possibilities he would create when he lived there. Investment into China was opened up in 2002 through the Qualified Foreign Institutional Investor (QFII) program, which allowed foreign institutional investors access to trading on the Shenzhen and Shanghai stock exchanges in China.

Investing in China is broken down into various share types with differing access levels. A-shares are shares traded in renminbi (yuan) on the Shenzhen or Shanghai stock exchanges in Mainland China by domestic investors, although QFII allows limited access with permission to this market. Another main share type are H-shares that local and foreign investors trade on the Hong Kong Stock Exchange.

Investing in China, in the beginning, was pretty problematic for foreign investors.

“Your money could go in, but it wasn’t actually allowed to leave. You could sell stocks, but you actually couldn’t repatriate the stock and repatriate the proceeds,” Ahern explained.

Over time, however, the number of QFIIs grew, and the rules began to change around how they could function. the amount of stocks that foreign investors had access to expanded, money was allowed to leave, and the creation of the Renminbi Qualified Foreign Institutional Investor (RQFII) program provided daily liquidity for the first time.

“I met Jon in 2012, and he talked about how there’s going to be this new China,” Ahern recounted. “You’ve got the A-share market, and it’s the second-largest — take the market cap of Shanghai and Shenzhen together as the second-largest stock market in the world — and they’re going to allow daily liquidity.”

Ahern self-described himself as a student of index methodologies, and he read the writing on the wall that MSCI’s global investable markets index methodology meant that China would be included in future emerging market index rebalances with its allowance of daily liquidity.

“China, at the time, if it were to be fully included, would be not billions or tens of billions but hundreds of billions of dollars, and you have all this passive money that would have to buy it,” Ahern said. “That was more of why I quit my job at BlackRock; I wanted to be part of building a business, a part of this that will have a huge effect on global portfolios.”

Ahern joined KraneShares in early 2013, and he and Krane flew to Beijing to meet with the China Securities Regulatory Commission (CSRC), China’s equivalent of the SEC, where they pitched their idea, alongside a local lawyer, of bringing the A-share market to U.S. investors through a New York Stock Exchange listing. The CSRC gave them the approval, but because of QFII restrictions, it had to be done through a Chinese asset manager.

“Then we went to meet with the State Administration of Foreign Exchange (SAFE) — it’s on the other side of Beijing — to buy the currency,” Ahern said. “To buy CNY, you actually need approval.”

This approval is part of protections put into place in many countries of the region after the Thai baht depegged in 1997, kicking off the Asian financial crisis and the collapse of many governments in the area. Currency controls have become commonplace for countries like China, South Korea, Taiwan, Saudi Arabia, and more in the wake of these economic crises and government collapses.

SAFE granted them approval for CNY through the Chinese managing partner, and then it was onwards to actually find a local asset manager.

“So we go into the China Merchant’s building to see their asset management unit, which is out of Hong Kong, called Bosera,” Ahern said. “And we go up, and we meet with the heads, and their CIO at the time was a guy named Charles Wang, and I was just like, ‘You seem kind of familiar, is there any reason?'”

Wang had recently moved back to China from the U.S. after running Acadian Asset Management’s actively managed emerging market mutual fund for many years as a quant. As a quantitatively oriented manager, Wang had also written various white papers that were published.

“That’s how I know you, as a nerd!” Ahern told Wang. “In this kind of index quant world, you know people’s white papers.”

It was the beginning of a partnership that continues to thrive today between Bosera and KraneShares, though Wang has since departed Bosera.

The Plan Comes Together

Bosera ultimately agreed to partner with KraneShares, and the two worked with and acquired the first license from MSCI for the MSCI China A benchmark, from which KBA was built, and though Deutsche Bank beat KraneShares out of the gate for the first China ETF by a handful of months with the Xtrackers Harvest CSI 300 China A-Shares ETF (ASHR), KBA was the first U.S.-listed ETF to offer an MSCI benchmark.

“The reason it took so long to get it up was just more of you were building operational pipelines that had never been done,” Ahern explained. “It’s not always rainbows and rose petals: it was hard, and it was a lot of work, and it was not an overnight success.”

In 2017, MSCI announced its partial inclusion of Chinese A-shares beginning in 2018, when A-shares were added to the MSCI Emerging Markets Index, making up approximately 0.73% of the total index, and A-share representation within the MSCI China Index more than doubled the index’s constituents at the time. In 2019, A-share representation was increased to 20%, where it has remained since.

“This story still has a long way to go,” Ahern said. “I’m a huge believer in this MSCI inclusion story… and I think it shows innovation doesn’t necessarily always come out of the biggest firms; it’s sort of some of the entrepreneurial capitalism of the United States but also China.”

KraneShares now manages over $10 billion in assets, including UCITS, and has 29 U.S.-listed ETFs. KBA currently has $520 million in AUM and offers exposure broadly across China’s sectors, including industrials, consumer staples, financials, information technology, materials, healthcare, and more. The fund has an expense ratio of 0.56%, with fee waivers that expire August 1, 2023.