You are at:Home»China Insights Channel»Everything Advisors Need to Know About an Evergrande Default 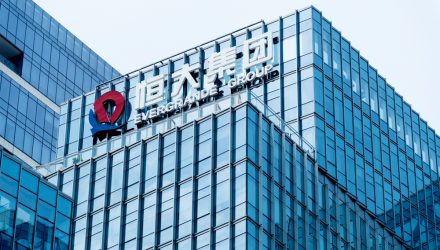 Everything Advisors Need to Know About an Evergrande Default

Fitch Ratings has just downgraded Evergrande, China’s real estate giant, to “restricted default” after it failed to make two coupon payments during a grace period that ended this Monday. While there has been no official commentary or confirmation from Evergrande, it marks the first time the company has been labeled as a defaulter by a major ratings company, reported Bloomberg.

Brendan Ahern, chief investment officer at KraneShares, sat down with ETF Trends to discuss the current outlook in China and how Evergrande’s restructuring is being seen from the side of the Chinese.

The size of Evergrande may be both its greatest downfall and the very thing that prevents it from having any type of catastrophic default. The vast majority of Evergande’s debt is mired within Mainland China, and the real estate giant has outstanding debts across multiple industries.

“The view in China is that an outright default would have a significant consequence on constituents in China,” Ahern explained.

These constituents include the individuals and businesses that have paid Evergrande to build a project (such as paying for apartments), the entities that funded the construction projects, and the construction companies themselves. Given the scope of projects that Evergrande has —the New York Times puts estimates at close to 800 projects unfinished, and 1.6 million people still waiting on homes— allowing the company to default and collapse would prove catastrophic to China’s economy.

There are upwards of 120 banks that are owed money and over 100 nonfinancial institutions that Evergrande owes money to; allowing a complete default and collapse would be akin to a Bear Stearns moment, Ahern said. The failure of Bear Stearns, a global investment bank, and its hedge funds led to the collapse of the Lehman Brothers and the Financial Crisis of 2008.

The local government has stepped in to assist with restructuring to prevent a default and collapse that would send a similar tidal wave through China’s markets and economy. Concerns that offshore bond payments would go unpaid are unfounded, as Ahern explained that China has said on many occasions that it would be treating Evergrande’s repayment of bonds the same as onshore bonds.

There isn’t much expectation for considerable market turbulence within China as investors have had a long time preparing for an Evergrande default. The Chinese government has stepped up efforts to ease the failing company’s impacts by reducing the reserve requirements for banks, freeing up more money for lending, as well as local governments working to help get construction restarted on many of the stalled apartments projects.

When it comes to restructuring the loans and bonds, Ahern anticipates it being very similar to how the European Central Bank (ECB) handled Greece’s debt crisis. “You can extend the maturities, you can cut the interest rate, so you allow Evegrande to muddle through.”

This will give the company time to complete its projects, and then Ahern anticipates a slow dismantling by region and breaking the company up into different parts, allowing it to complete projects before the company eventually goes away entirely. This aligns with the Chinese government’s stance that it has indicated on numerous occasions an unwillingness to bail a company out due to poor corporate leadership and decision-making.

In the immediate, microcap companies within China’s real estate sector will most likely suffer from regulation changes, Ahern believes, but largely Chinese markets remain unaffected by Evergrande’s inevitable collapse.  It paints a much different picture for Mainland China’s perspectives than perspectives in the U.S.

For investors interested in investing in the Chinese economy that is mainly unaffected by Evergrande’s default and restructuring the KraneShares Bosera MSCI China A Share ETF (KBA) is an option that grants access to China’s A-shares. The ETF captures mid-cap and large-cap representation of Chinese equities listed on the Shenzhen and Shanghai Stock Exchanges, which have been historically closed to U.S. investors, and carries an expense ratio of 0.59%.