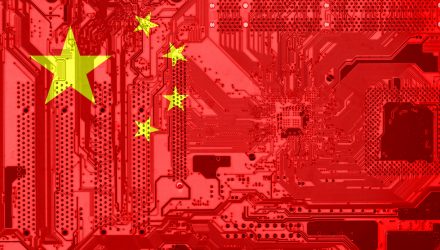 KWEB is the only ETF on the market that offers pure-play exposure to Chinese software and information technology stocks that are China’s answer to U.S. firms like Amazon and Facebook.

China is a country that does a tremendous amount of online shopping, with online retail sales increasing at roughly 16% a year. The number of consumers utilizing the internet in China was 854 million, but only reflects around 61% of the total population, whereas in the U.S., 294 million people had internet during the same time, an equivalent of 89% of the total population. It leaves a lot of room for growth.

“You’ve got so much more upside that we’ve seen come to fruition in the last couple of years,” Lydon said.

Recent regulations within the technology sector by China have hit the internet industry particularly hard, causing pullbacks by investors as many wait for the dust to settle. KWEB in particular has been an ETF that has been hit hard, falling below its 200 day average and declining over 30% from its April prices. At a time when most investors would have pulled back and out though, Lydon believes that it is an ETF to watch.

“If you do see potential with China growth and China internet companies, this is something to keep on your radar for sure,” he said.

It is an ETF that is worth dollar-cost averaging into as a trend follower, he explained, or is at least worth investing in once it climbs back above its 200 day average. Long term growth potential in China will only continue to increase, though, as online sales make up an enormous amount of retail sales for the Chinese economy. Lydon sees using mobile phones for online shopping with technologies similar to Amazon as the future of e-commerce.

“You’ve got a lot of great companies that are really doing fantastic as far as getting the right things to the right people at the right price, and no matter how the Chinese government feels about technology companies, or wants to get involved, the interaction between the U.S. and China is not going to be separated,” Lydon explained. These companies include major players such as Tencent, Alibaba, and JD.com.

Looking at a broader global investment strategy, at least 55% of allocations should be going to domestic investments, which leaves up to 45% allocated to overseas. Of that, Lydon believes that at least 20% should be invested in emerging markets specifically.

“You’re going to get more growth than you have in developed markets overseas, hands down,” Lydon said. On top of that, the valuations are typically 50% off in emerging markets compared to what they are in the U.S., and so taking into account the growth potential and prices, investing in these types of companies within China specifically just makes sense.

“Does that make sense to put a 5% allocation into something like this and hold it for ten years? Absolutely,” he said. Indeed, it is something that Lydon has done personally, having purchased KWEB a month previously.

Listen to the full podcast episode on KWEB: