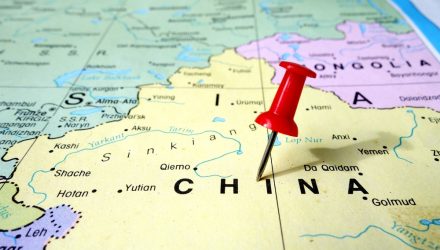 Exchange traded fund investors who are too focused on the domestic U.S. markets may be missing out on international opportunities, especially when it comes to China.

According to BlackRock’s research unit, China should no longer be considered an emerging market and investors should raise their exposure to the Asian economy by as much as three times since the country’s capital markets have expanded in both size and sophistication, the Financial Times reports.

Consequently, BlackRock Investment Institute now advised allocation to Chinese assets to be “two to three times” that of diversified global portfolios, like the MSCI All-World index, where China is the third-largest constituent at a weight of 4.2%. Consequently, BII believed China’s weight in a diversified global portfolio should be closer to 10%, or more than Japan but still well below the U.S.

It was “time to treat [China] as an investment destination separate from emerging and developed markets. China’s economy has come through the Covid-19 shock stronger than global peers, just as it did after the global financial crisis,” according to BII’s mid-year outlook published in July.

However, BlackRock’s recommendations comes at a time of increased tensions between the U.S. and China, along with greater regulatory scrutiny from Beijing on the growing influence in its rising technology and internet segments. Politicians in both Washington and Beijing have raised concerns over Chinese companies listing in the U.S., which have contributed to recent volatility.

“The spheres of influence between the two superpowers are moving apart. In the near term that can lead to market volatility. In the longer term, if you want to get China you have to go to China,” Li added.