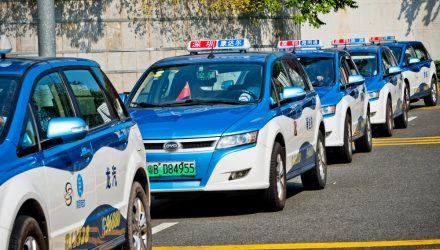 Electric vehicles are already the talk of the automotive industry, a good sign for the KraneShares Electric Vehicles and Future Mobility Index ETF (KARS).

“New energy vehicles refer to battery-powered and hybrid cars. The category accounted for more than 10% of new car sales in China in March, and grew to 11.4% in May, said Wang Chuanfu, founder of BYD,” the article said further. “He forecast that the penetration rate would surge to more than 70% in 2030. That’s according to a transcript the company provided of his remarks at the China Auto Chongqing Summit held June 12 and 13.”

KARS, which is up about 9% for the year, seeks to measure the performance of Solactive Electric Vehicles and Future Mobility Index. The Index is designed to track the performance of companies engaged in the production of electric vehicles and/or their components, or engaged in other initiatives that may change the future of mobility.

Chinese automakers are looking to dominate market share as “Beijing would like 20% of new cars sold to be new energy vehicles by 2025. As the local new energy vehicle market grows, BYD’s Wang said he expects Chinese car brands will be able to account for 60% by 2030, thanks partly to their grasp of core technology.”

Additionally, foreign automakers are looking to China to break ground on new products. For example, Volkswagen is using China as a test bed for its latest electric car models.

“Many foreign automakers such as Volkswagen have looked to launch electric cars in China first, where sales of battery-powered vehicles have gotten a boost from central government subsidies and other preferential policies.”