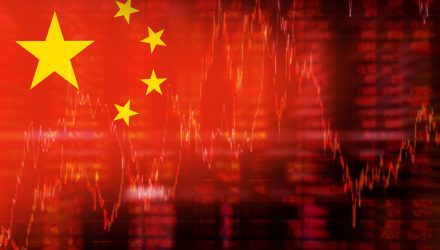 China’s regulatory regime, which started in earnest last year and focused largely on consumer internet companies, was an obvious drag on Chinese growth stocks and the related exchange traded funds, and plenty of that negative sentiment carried over into 2022.

In what could ultimately prove to be good news for ETFs such as the KraneShares CSI China Internet ETF (KWEB), some market observers believe that Beijing’s regulatory crackdown is nearing its end, and that could pave the way for rebounds by some previously high-flying Chinese growth stocks.

KWEB, which tracks the CSI Overseas China Internet Index, might already be reflecting increasingly bullish sentiment. The $5.77 billion ETF is up almost 12% for the week ending December 1 and higher by 38.60% over the past month.

In a recent interview with CNBC’s “Squawk Box Asia,” KraneShares founder and CEO Jonathan Krane said that peak regulation in China may be here and that Beijing’s regulatory efforts could cool going forward.

“Chinese tech stocks have had some difficult years following the regulatory crackdown and amid the ongoing Covid restrictions, though the sector has recovered slightly on reopening hopes,” reported Abigail Ng for CNBC.

Accurately, Krane pointed out that technology is a major part of the Chinese economy.

“It’s a very important sector, it’s the consumer of China — so I think you’re gonna see a lot of support around the sector going forward as China reopens,” he told CNBC.

In the case of KWEB, as is the case with comparable U.S.-focused ETFs, tech also encompasses the consumer discretionary and communications services sectors. Those groups, which were largely the epicenters of the aforementioned regulatory clampdown, combine for 86.25% of KWEB’s portfolio, according to issuer data.

Ramiz Chelat of Vontobel Asset Management highlighted JD.com (NASDAQ:JD) and Meituan as among the Chinese internet names to watch next year. Meituan and JD.com are KWEB’s third- and fourth-largest holdings, respectively, combining for over 15% of the ETF’s roster. Online retailer JD.com is catching market participants’ eyes because it’s sharpening its focus on China while shedding lagging operations elsewhere in Asia.

As Krane noted, KWEB components could also benefit from a more earnest China reopening. Currently, the Chinese Communist Party (CCP) is maintaining its zero-COVID policy, but a recent series of intense protests and global media outlets’ coverage of those events could compel the CCP to ease some of its coronavirus restrictions. For now, it’s a big “if,” but if it happens, KWEB stands as an obvious beneficiary.