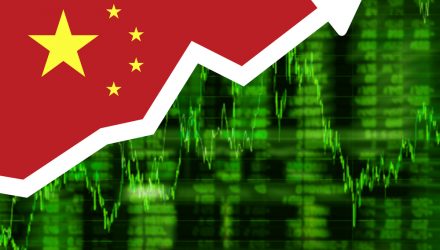 China ETFs Are Enjoying One of Their Best Days Ever

China country-specific exchange traded funds surged as Beijing pledges to support the financial markets and Chinese regulators set out to communicate with their U.S. counterparts to reach an agreement on audit supervisions.

While the support from Beijing offered little clarity over what authorities will specifically do to achieve the goals, the promises were the first time China publicly acknowledged investors’ top concerns. The move underscored President Xi Jinping’s focus on maintaining China’s economic and financial stability before a Communist Party congress.

“It’s the end of capitulation,” Peter Garnry, head of equity and quantitative strategy at Saxo Bank, told Bloomberg. “This confirms that the Chinese government sees healthy and strong equity markets as key for the country going forward. The equity market is totally sentiment-driven right now and everyone is looking for an excuse to buy, though the headwinds for Chinese equities are still enormous.”

Chinese stock markets have been under heavy pressure, especially China-related funds trading in the U.S., as the Securities and Exchange Commission threatened to delist some Chinese companies from U.S. exchanges over unwilling audit attempts. However, The China Securities Regulatory Commission also said it will push forward new rules for Chinese companies to list overseas, Reuters reports.

Some market watchers underscored comments that said the regulatory process could be “transparent and predictable,” providing more stability to the markets.

Meanwhile, Beijing’s crackdown on the country’s big internet platforms, which have dragged down China’s technology sector, could be completed in a timely manner and put an end to further volatility.